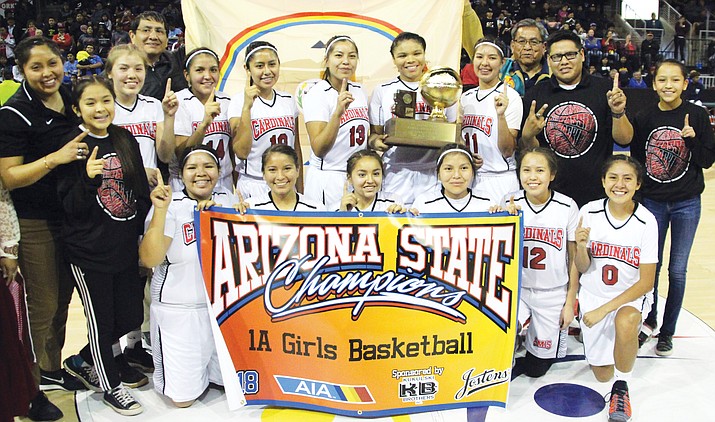 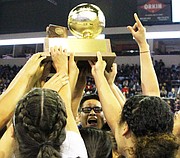 PRESCOTT VALLEY, Ariz. — When asked what it will take for the St. Michael Lady Cardinals to repeat as 1A State Girls Champions, Coach Carl Adams said, “Play Cardinal basketball, play northland basketball — get into their face, fast up tempo pressure defense, with motion quickness and speed.”

When senior Delila Nakaidinae was asked about the Cardinals return trip to the championship game, her response was, “We didn’t want to let anyone (fans) down.”

St. Michael defeated the Ray Lady Bearcats, 56-49, to make it to the 1A finals, the BaboquivariWarriors won over the Rock Point Lady Cougars, 51-36.

The Lady Warriors of Baboquivari took an early lead, in the opening quarter, 12 - 11. St. Michael answered with a five-point advantage at the half, outscoring the Lady Warriors, 24-18 and took the lead for good, at intermission, 35-30.

The Lady Warriors came out in the second half with a 13 point run, to enhance their lead, 48-30, with less than two minutes left in third quarter. The third quarter ended with the Lady Cardinals leading, 50-35.

In the final quarter, both teams cleared their benches giving the underclassmen .some experience for the upcoming season. The Lady Cardinals won convincingly, 60-40.

Smith led the Cardinals with 19 points, followed by Star Anderson with 16 points.