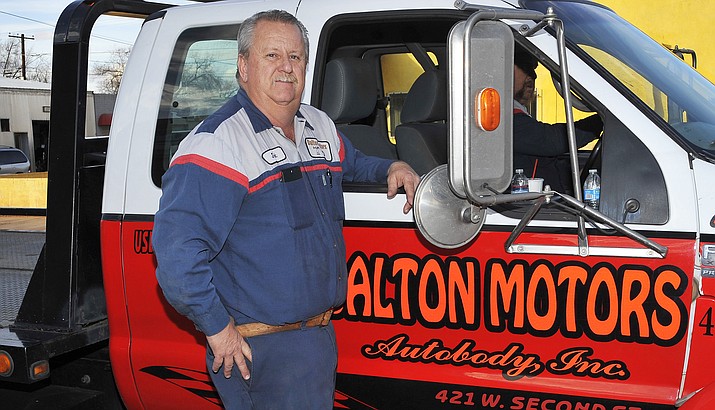 Jack Dalton stands next to one of his tow trucks. (Photo/Todd Roth)

WINSLOW, Ariz. — Dalton Motors is located in downtown Winslow, on old Route 66. This is the original location since Dalton Motors was established in July 1965 by Jack Dalton’s father, who still comes in everyday at age 85.

Dalton is the current manager of Dalton Motors and is recognized all over Winslow, helping and participating in many civic events.

The Navajo-Hopi Observer talked to Dalton recently and found some interesting facts.

Dalton said he was born and raised in Winslow. Dalton Motors started out as a body shop by Dalton’s father, who previously worked at the El Grande Garage.

“We started off doing collision repair and expanded into towing after that in the early 70’s,” Dalton said. “Then in the last few years we have expanded into doing service and mechanical work.”

Dalton said he has never really counted how many cars Dalton Motors repairs each year but estimates around 70 to 100 cars a month.

“Some cars come for a short time and some are here for a few weeks,” Dalton said.

The company employs 13 people, who are trained on I-Car, an ongoing training program that keeps them up on the latest techniques. I-Car has dozens of courses available, some of which are required to be a certified mechanic.

“Not a day goes by without having our noses in a computer to do diagnostics and repair,” Dalton said. “It’s a computer world now, besides diagnostic chores, computers are used for administrative purposes as well as paint mixing.”

Dalton Motors is a family business, too. Dalton’s son has worked there for a couple of years and if another generation starts, that would be four generations of Daltons.

“And maybe his son might come here to work,” Dalton said. “My grandson is only two years old but he loves cars already.”

Dalton said he was grateful for the support of the Winslow community after all these years and effusive in his praise for the support that Winslow gets from the surrounding Native American communities.

“Winslow owes a debt of gratitude to the Native Americans who patronize the town,” Dalton said. “They are a large and unsung part of our local success.”