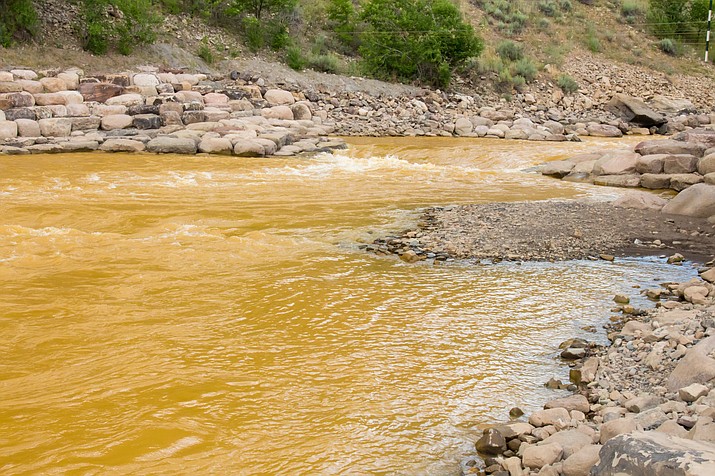 A 2015 spill at the Gold King Mine in Colorado caused the Animas River to flow yellow with wastewater. (Stock photo)

WINDOW ROCK, Ariz. — On Feb. 12, the Navajo Nation won a victory in its fight for fair compensation for the harm caused by the Environmental Protection Agency (EPA) and its contractors from the Gold King Mine spill of August 2015.

The spill was triggered when crews that were supposed to be cleaning up the abandoned mine in Silverton, Colorado, accidentally breached a mine tunnel instead. The breach sent millions of gallons of mine wastewater streaming into the Animas River.

The spill contained zinc, lead, iron and arsenic and turned the river a ghastly orange-yellow for miles. The Animas feeds several other Southwestern rivers, including the San Juan and, ultimately, the Colorado.

The spill affected local residents and their water supply, including residents of the Navajo Nation, which filed a lawsuit against the EPA in August charging that the tribe’s water had been “poisoned with some of the worst contaminants known to man.”

Instead, the court upheld all claims, including Comprehensive Environmental Response Compensation and Liability Act (CERCLA) claims, and claims for negligence, gross negligence, trespass and nuisance.  The Court also refused Environmental Restoration’s demand to strike the Nation’s request for punitive damages.

The case arose because the EPA, its contractors and other responsible parties contributed to the buildup of contaminated water at the Gold King Mine and caused a catastrophic blowout that released at least 880,000 pounds of toxic, heavy metals into waters they knew would reach the Navajo Nation.

“We will continue to fight for justice for the Navajo people and the Navajo Nation,” said Navajo Nation President Russell Begaye. “Our people have suffered greatly and must be compensated fairly.”

“This is an important landmark in our fight to hold the parties responsible for the harms caused by their negligent and reckless conduct,” continued Navajo Nation Attorney General Ethel Branch. “We will continue to push ahead with renewed strength and resolve.”

John Hueston, the Navajo Nation’s outside counsel, added: “We can now proceed to prove what the Navajo Nation has known from the beginning — that Environmental Restoration blatantly ignored warning signs, disregarded serious risks and recklessly burrowed into the wrong elevation of the mine without proper equipment or an emergency response plan in place.”

In January of 2017, the EPA rejected the Nation’s claims for damages arising out of the 2015 Gold King Mine Spill.

The agency statement said because the agency was conducting a site investigation at the Gold King Mine under the CERCLA, the agency’s work is considered a discretionary function under this law. Therefore, the circumstances surrounding the Gold King Mine incident did not meet the conditions necessary to pay claims.

However, those who had filed claims and whose claims had been denied had six months from the date of the denial to challenge the decision with the United States District Court.

The agency said the EPA had taken responsibility for the Gold King Mine incident, including providing financial support, continued water treatment and monitoring, developing and implementing a permanent remedial plan for the broader mining region and research to improve the understanding of how contaminants move through complex river systems.

The Navajo Nation said it would not sit by while the federal government failed to fulfill its legal and moral obligations. All claims rejected by the EPA were included in the tribe’s lawsuit.

In September 2016, the Gold King Mine was designated as a Superfund site.

Environmental and tribal activists welcomed the government’s announcement Sept. 7 that it had designated Gold King Mine a Superfund site, advancing the cleanup of an area contaminated by a multimillion-gallon toxic spill last year.

The Colorado mine was one of dozens of sites designated by the EPA as the nation’s most polluted — even though an agency official said the final cleanup is still a decade or more away.

The Superfund designation allows the agency to collect data on surface water, rocks and other environmental aspects in San Juan County’s Bonita Peak Mining District, which includes the Gold King Mine.

EPA Project Manager Rebecca Thomas said it could take up to 10 years to gain control of the contamination and completely clean the area. She said the agency will continue to collect data, identify alternatives to address the contamination, then will go into a construction phase.