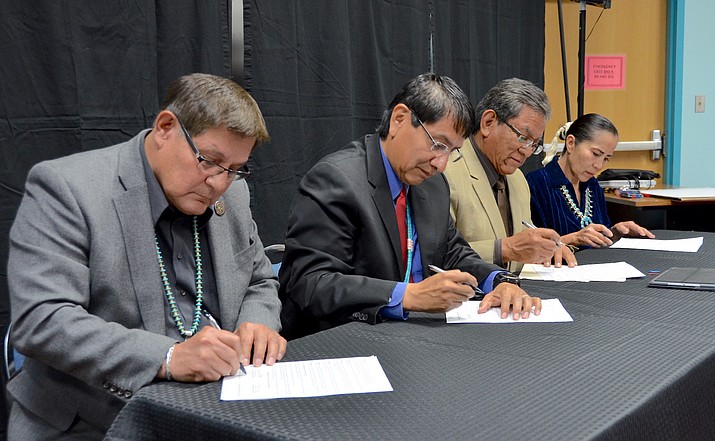 WINDOW ROCK, Ariz. — The Navajo Nation has officially kicked off the Year of the Treaty (Naaltsoos Sáni’), a year-long commemoration of the forced exile of the Diné People, their incarceration at Hwéeldi, the Treaty of 1868 and their triumphant return to Diné Bikéyah.

All three branch chiefs came together Feb. 9 to sign a proclamation marking the 150th anniversary of the treaty and to encourage the Navajo people to reflect on their shared past, present and future.

In 1864, the Navajo people were forcefully removed from their homelands and moved 300 miles east to Bosque Redondo, New Mexico, also known as Hwéeldi or The Long Walk.

The June 1, 1868, treaty ended the Long Walk and the suffering at Bosque Redondo, but it also opened the doors for the Navajo to return to their ancestral homeland and established the tribe as a resilient and sovereign nation.

“When I think about the treaty, I wonder what our leaders, our naat’aanii, were thinking when they put their X’s on the document,” said Navajo Nation President Russell Begaye. “I’m sure they experienced death during the Long Walk and while they were incarcerated, but when they signed the treaty, when they put those X’s on the document, I’m sure they were also thinking that they had survived and that they were going back to Diné Bikéyah, to our sacred mountains, to our rivers and forests and deserts. They were going back to their children and relatives who remained at Bears Ears or Navajo Mountain or Canyon de Chelly.”

“Since the signing of The Treaty of 1868, the Navajo Nation has become a strong and preserving nation. The treaty allows the Nation to practice our sovereignty every day, which would not have been possible without the courage and strength of our past leaders. The past leaders and our Navajo people who returned home from Hwéeldi fought for the interest of future generations,“ Bates said.

Begaye, too, spoke about how the signing led to the strengthening of the Nation.

“Our leaders were thinking that, from here on out, we would become stronger every day,” Begaye said. “Each year, we would multiply and continue to grow and blossom. Our children would grow and become leaders. Their children would become leaders. As we think about the treaty, let’s think about our leaders. Let’s be a nation of k’e and hozho, and let’s be proud that we are the great Navajo Nation.”

The highlight of the Year of Treaty will be the display of the original treaty at the Navajo Nation Museum, on loan from the National Archives and Records Administration, during the month of June. The treaty, signed on paper torn from an army ledger book, included signatures from federal officials and X’s from Navajo leaders.

“This is a really historic moment knowing that, for the first time, the treaty will be on Navajo land for our people to view, to see, to read and to know that we are a sovereign nation,” Begaye said. “It is nations that sign treaties with other nations. We are not a minority group, but a nation within a nation. Always be proud that by the signing of this treaty the United States government recognized that the Navajo Nation is a nation.”

The treaty also will be on display at the Smithsonian’s National Museum of the American Indian, in Washington, D.C., from February 20 through early May.

Navajo branch chiefs are encouraging the public to reflect on resiliency of the Navajo people. The theme for the Year of the Treaty is “Perpetuate the Diné Way of Life through Resiliency” (Iiná Náás Yiilyéél, Bee Hada’iinilní).

“One hundred and fifty years ago we went through some hard times as people, but we overcame,” Nez said. “We are a strong nation, a strong people, and in 2018 we will magnify that to our younger generation.”

Nez also encouraged healing as people think about the injustices and traumas of the past.

“Some of us are in a place where the struggles our ancestors went through still negatively affects us today,” he said. “Some of us carry that anger within us and this is an opportunity to heal ourselves and our families. I’m not saying to forget, but to move forward with the strength and resilience that our ancestors instilled in each of us for generations to come.”

The proclamation represents weeks of planning and careful wordsmithing. All three branches worked to craft a document that commemorates the past but also predicts a strong future.

Chief Justice JoAnn Jayne also asked people to honor the leaders who signed the treaty and helped guarantee a future for the Navajo people.

“They had the wisdom, the love, the courage, to think about us,” she said. “They are the ones that had to put their marks down on this naaltsoos. They labored to help us become who we are now. I thank them for watching out for our people.”