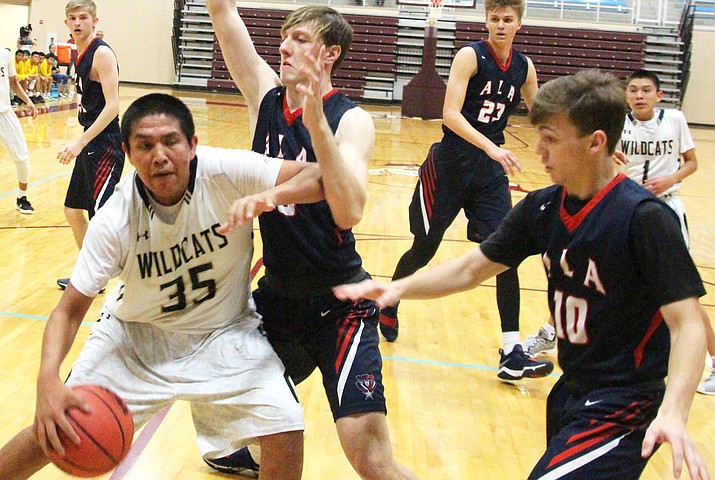 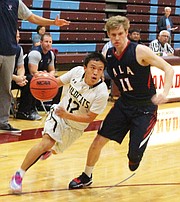 Chinle Wildcats Josiah Tsosie (12) drives pass ALA’s Spencer Tyler (11) during the 2018 Arizona AIA 3A State Boys Basketball Championship first round game, was held at the Ganado Pavilion, in Ganado, Arizona. This neutral site game was won by the Chinle Wildcats, 58 to 48. (Anton Wero/NHO)

GANADO, Ariz. — For the second game in week, the Chinle Wildcats had to rely on a strong second half to overcome a first half shortfall. In the end, the No. 6 seeded Wildcats won, 58 - 48, over the No. 11 Patriots of American Leadership Academy.

The Chinle Wildcats were the only 3A North boys basketball team advancing and met the No. 19 Wickenburg Wranglers, in the quarter finals of the 2018 Arizona AIA Basketball 3A State Championship, Feb. 17 at the Prescott Valley Event Center, in Prescott Valley, Arizona.

The Patriots of American Leadership Academy (ALA) soared out to a double digit lead, 17 – 4, in the first quarter.

The Wildcat’s Elijah James, Cooper Burkank and Chance Harvey went on a 16 – 4 run, to cut into the lead, that stood at 23 - 20, in the Patriots favor with four minutes left in the second period.

“I decided that our state tournament run wasn’t going to end tonight,” Burbank said. “Not tonight, we had to push ourselves.”

“We talked about being patient, be patient and wait for the open shots,” said Head Coach Raul Mendoza. “We were forcing our shots from the outside and not going into the paint.”

The Patriots, who had a huge height advantage, began to commit fouls as the Wildcats drove into the paint for contested lay ups, earning them trips to the charity strip. The Wildcats did not capitalized on the opportunities and connected on only six of 15 free throw attempts and still trailed, 43 – 35, at the end of the third frame.

Chinle picked the pace early on in final quarter. Their offense went from baseline to baseline, a full court offensive explosion that stymied the Patriots. With every score, the crowd erupted with thunderous cheers. The Patriots could only stand back and watch as their lead, which was once 13 points, was annihilated point by point.

“Tonight, they didn’t play well and (weren’t) consistent at all, in the first half,” Mendoza said. “But with this team (the Wildcats), they always find a way to come out of something they put themselves in, at the end they came out and played good defense and made their free throws.”

The Wildcats were led by Burbank with a game high 27 points, Angelo Lewis and James added nine points and seven points, respectively.