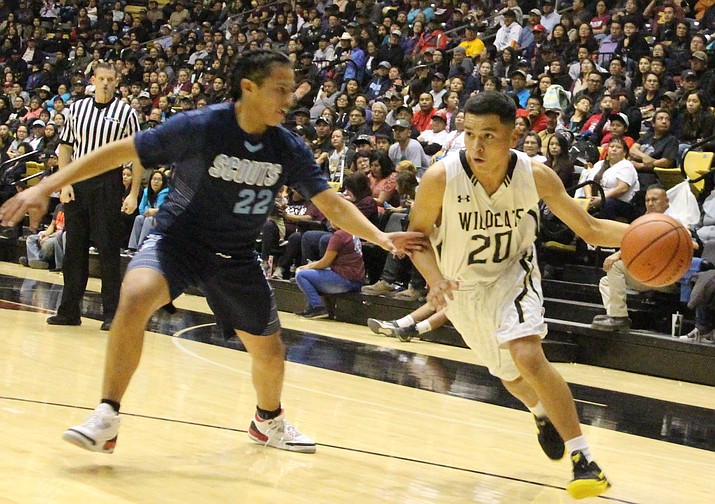 Chinle Wildcats Chance Harvey (20) looks to drive along the baseline, as Burk Williams defends, during the 3A North Region Tournament at the Chinle Wildcat Den, Chinle won 61 to 47. Photo/Anton Wero

CHINLE, Ariz. — Playing the Scouts of Window Rock for the third time this year, the No. 1 Chinle Wildcats reached the Championship game with a 49 to 45 win over No. 4 Tuba City Warriors, in the semi-finals game of the 3A North Regional Tournament, in the Chinle Wildcat Den, hosted by the NTUA Choice Wireless.

“I hope to execute, play like we are capable of playing offense and defense for four quarters” said Raul Mendoza, head coach for the Chinle Wildcats. Mendoza who has coached boys and girls high school basketball for 41 years to date, 39 years as head coach, was named the Regional Coach of the Year, at the conclusion of the tournament.

“We got a big job ahead of us, we need to score more points than they do and if get mores rebounds, play defense, if we can control some of the tempo, we should be all right,” said Scouts Head Coach Joel Harper.

“I told them in the locker room, we didn’t play defensively and let them score easy” Mendoza said, looking for his 800 plus win.

“I told them play aggressive and apply more defensive pressure,” he added.

“We slacked off defensively, in the first half and we can’t do this in the upcoming state tournament, we need to do better in the second half,” Lewis said.

Chinle picked the intensity on defense causing numerus turnovers and scoring on uncontested lay ups and continuously sending the near capacity crowd, mostly Wildcats fans, into a March Madness like Frenzy. The Wildcats outscored the visiting Scouts, 15 to 7, taking a double digit 46 to 32 advantage, into the fourth quarter.

The Wildcats and Scouts matched each other point for point, in the final period, with both scoring 15 points. The final was 61 to 47, in the Chinle Wildcats favor.

“I thought we did a better job in the second half, we played better defense and been more patience, waiting for better shots,” Mendoza said. “Our defense got better and we got better shots.”

In the second round of 2018 Arizona AIA 3A Boys State Basketball Championship, the No. 6 seed Chinle Wildcats will be playing the winner of the No. 11 American Leadership Academy and No. 22 Holbrook Roadrunners match up, Feb. 17 at the Chinle Wildcat Den.