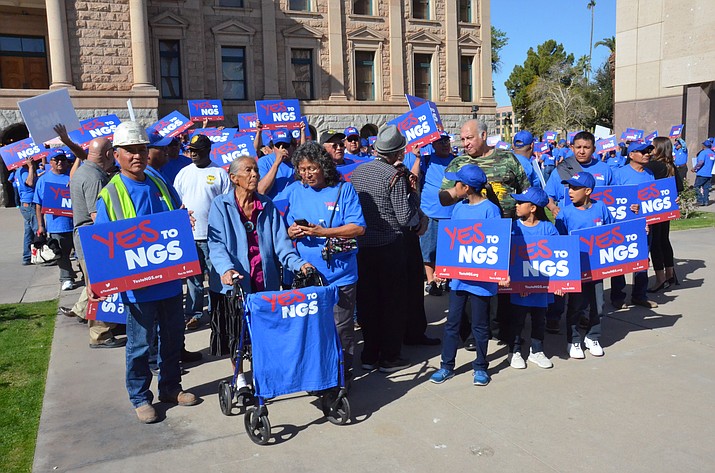 Photo/Navajo Nation Office of the Speaker

Photo/Navajo Nation Office of the Speaker

A crowd of Navajo and Hopi workers from the Navajo Generating Station gather outside the Arizona Capitol Feb. 6.

PHOENIX (AP) — Hopis and Navajos who work at a coal mine near the Arizona-Utah border said Feb. 6 their family lives and earning power will suffer greatly if the power plant fed by the mine is shuttered as planned.

The Navajo Generating Station in Page is set to close at the end of 2019 unless a new owner can be found. That’s considered a long-shot, but the company that owns the supply mine says it has identified investors interested in one of the largest coal plants in the West.

More than 200 workers, their family members and supporters in blue T-shirts, holding up signs that said “Yes to NGS,” rallied outside the Arizona Capitol in Phoenix to call for the power plant’s life to be extended. The coal industry is a major source of revenue for the Navajo and Hopi tribes, with hundreds of jobs held by tribe members.

Dwight Lomaintewa, who lives in the Hopi village of Mishongnovi, said the 65-mile (104 kilometer) daily drive to Peabody Energy’s Kayenta Mine is well worth it. A steady job means his family can stay on the reservation and his children can learn the language and traditions, the 33-year-old said.

Myron Richardson, a 42-year-old Navajo welder, said he was fortunate to get a job at the mine after being away from home for construction jobs. If the power plant and mine close, he said he’d likely have to move, and his children’s cultural lessons with their grandfather would cease.

“It would be like starting all over again,” he said.

The Salt River Project, which operates the power plant, said its employees will be offered jobs elsewhere around Arizona. The utility announced last year it would shutter the 2,250 megawatt plant because of cheaper natural gas prices. It opened up its financials to potential new owners, and about 15 non-disclosure agreements were signed.

Peabody has said it expects to have agreements with any serious buyers in place by the end of March. Investment firm Lazard is leading the search.

A new owner would have to comply with a costly U.S. environmental protection rule to reduce nitrogen oxide emissions, negotiate coal supply agreements and secure a land lease with the Navajo Nation. Those processes have been time-consuming in the past.

“The longer this goes on without a serious offer to move forward on this, the less time there is to affect those types of agreements,” said SRP spokesman Scott Harelson. “We can’t proceed as if it’s going to happen because then we become vulnerable to not meeting our obligations.”

Environmentalists have praised the decision to shutter the plant decades earlier than expected. Tribal leaders are open to having a new owner, and the Interior Department as an owner of nearly one-quarter of the power is keeping everyone talking.

“Interior is committed to working with all parties, to include current or any future owners, to keep the power plant operational in support of good-paying tribal jobs,” Interior Secretary Ryan Zinke said in a statement.

State Sen. Jamescita Peshlakai, who is Navajo, told workers at the rally she would fight for them, but to save money and “prepare for the day that there is no more coal in the ground.”

Electricity from the plant also helps send water through a series of canals to metropolitan Phoenix and Tucson. But even the entity that runs the canal system, the Central Arizona Project, has bought power elsewhere.

The coalition of groups rallying Feb. 6, led by the United Mine Workers of America, asked SRP and CAP to commit to buying power from the Navajo Generating Station if a new owner is found.

Both said they’d consider if it makes economic sense.