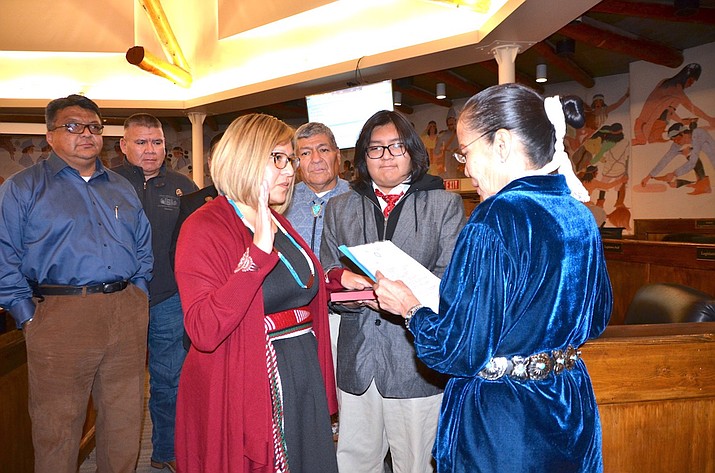 WINDOW ROCK — On Jan. 25, during the fourth day of the 2018 Winter Council Session, the 23rd Navajo Nation Council confirmed the appointment of Rhonda Tuni, to serve as a probationary district court judge for the Navajo Nation.

Tuni earned a Bachelor Arts in Sociology — Criminology and a Bachelor of Arts in Humanities from Fort Lewis College, and a Juris Doctorate from the Arizona Summit Law School. She is a member of the Navajo Nation Bar Association and the New Mexico Bar Association.

In her presentation to the Council, Tuni attributed her accomplishments and successes to her parents, grandparents, and many others who have inspired and motivated her through Navajo cultural teachings to pursue her goals and to help other people.

Speaking in the Navajo language, legislation sponsor Council Delegate Otto Tso (Tó Nanees Dizi) commended Tuni for respecting and valuing Navajo teachings and using them as means to help other people. He stated that the fact that Tuni grew up on the Navajo Nation, left to pursue her education, and came home to help her people sends a positive message to young Navajo people.

On Oct. 30, 2017, the Law and Order Committee passed a resolution recommending the probationary appointment and on Jan. 16, President Russell Begaye issued a letter appointing Tuni as a district court judge.

“The Law and Order Committee has been working hard to fill all of the judge positions. Last night we accomplished the goal of confirming a chief justice. I would encourage you to support her. We always want our young ones to fulfill their goals and I know she will be there for our people,” Yazzie said.

The Navajo Nation Council approved the probationary appointment Jan. 25 with a vote of 20-0. In accordance with Title 7 of the Navajo Nation Code, Tuni will be required to serve a two-year probationary period. Immediately following the confirmation, Chief Justice JoAnn B. Jayne administered the oath of office to Judge Rhonda Tuni.