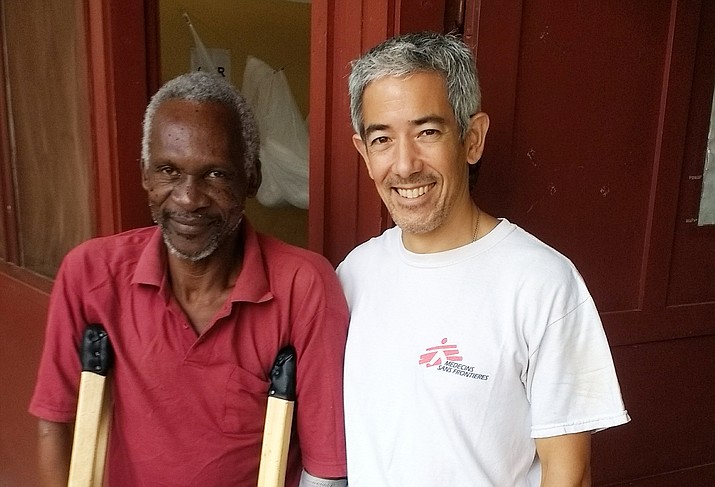 FLAGSTAFF, Ariz. —Doctors Without Borders will hold a recruiting session for medical and non-medical workers Feb. 13 at 6:30 p.m. at the Flagstaff Public Library, 300 W. Aspen Ave. A human resources officer will be present to answer questions.

Last year, Dr. Edward Chu, an Arizona based physician, took a six-month break from his role as an ER doctor in Tuba City at Tuba City Regional Health Care Corporation and in his management role for the Navajo Nation for Inscription House EMS and Tuba City EMS to gain international experience with MSF (Doctors Without Borders) in the Central African Republic (CAR).

Chu said for those who work on the reservation, there are a lot of similarities to the work that Doctors Without Borders and other humanitarian organizations do and the skills are similar: recognizing cultural nuances in the medical response, working with and training traditional healers and translators, incorporating telemedicine, and medical skills such as general surgery, midwifery and mental health care.

“Up here (on the reservation) you don’t have the same resources available to you than you might in a big city,” Chu said. “Oftentimes the social and political environment is something you have to be sensitive to.”

In medical school or residency, Chu explained, the focus is on the clinical picture or problem and social workers focus on the other issues whereas on the reservation or in countries Doctors Without Borders serve, the social aspects are dealt with on a daily basis by him and others, even if they are practicing emergency medicine.

“You only have one transfer ambulance service and one helicopter service and you have to make decisions about what patient goes where and how, and how many you can transfer and oftentimes you end up having to make decisions whereas if you’re in big city hospital, you don’t have to do that,” Chu said. “Similarly, if you’re out in the field with Doctors Without Borders, you have to make similar decisions — am I triaging patients, making the most of the resources that you have.”

Chu said they do have a CT scanner in Tuba City, some of the other clinics and hospitals on the reservation don’t and many places that Doctors Without Borders send people don’t either.

In the Central African Republic, Chu spent six months relying entirely on a bedside ultrasound and a simple x-ray. That experience helped him on the reservation when a patient came into the ER for an exam.

“If you never get a chance to practice that way then you never learn what those things look like without having those images presented to you,” Chu said. “Being able to have that as my exclusive tool gave me skills to bring back to the reservation.”

Chu points out that Doctors Without Borders is not just looking for doctors. The organization works with many different positions, some non-medical, because it takes a lot of different skills to keep a hospital working in different countries, some of which are in war zones.

“Logisticians who keep the lights on, clean water for patients and medications and having pharmacists and administrators who make sure that staff get paid and things like that,” Chu said.

He also said for people who are already working on the reservation, they already experience living away part of the time, living in group situations with people they have not met before in a house that is not their own. Chu’s own experience in Tuba City is much the same with a lot of pot lucks with staff and making their own entertainment. That is true in the field, too.

“It voids a lot of issue that can come up in the field when you throw a bunch of people who come from different cultures and speak different languages together,” Chu said. “In the field, they throw everyone together on a base…you’re always with other people, there’s much less privacy. Having people who have that degree of flexibility [helps].”

And the experience works in reverse, as well, Chu said, and gives a different perspective on things that other doctors might find frustrating if they have only worked in a big hospital.

“But when you come back from the field, the fact that there’s a bit more bureaucracy, that things sometimes don’t happen as fast as you might like, it all seems very fast and very easy compared to what you’ve been experiencing in a place like the Central African Republic,” Chu said.

The overlap includes violence that people are exposed to on the reservation and mass casualty events that are similar to 14 people involved in a bus accident and transferred to a very small hospital, which puts a bigger strain on resources than if they came to a bigger hospital with other hospitals nearby.

“On the rez, we’re the only show in town, they’re going to come to us,” Chu said.

“You learn to be keyed into those circumstances working on the reservation,” Chu said. “Those are often similar circumstances for those patients in other parts of the world.”

While the cultures Chu found in the Central African Republic are different than those found on the reservation, there were similarities there as well including traditional medicine and ideas.

“You have to be aware that your patients are probably using other medical interventions or have other ideas,” Chu said. “They may not necessarily share the same medical ideas that you have. And that does carry over, that is something very similar to working in other cultures. Being sensitive to that is really important overseas, too.”

More information about the recruiting event in Flagstaff is available at http://www.doctorswithoutborders.org/support-us/events/recruitment-information-session-flagstaff-az-0.