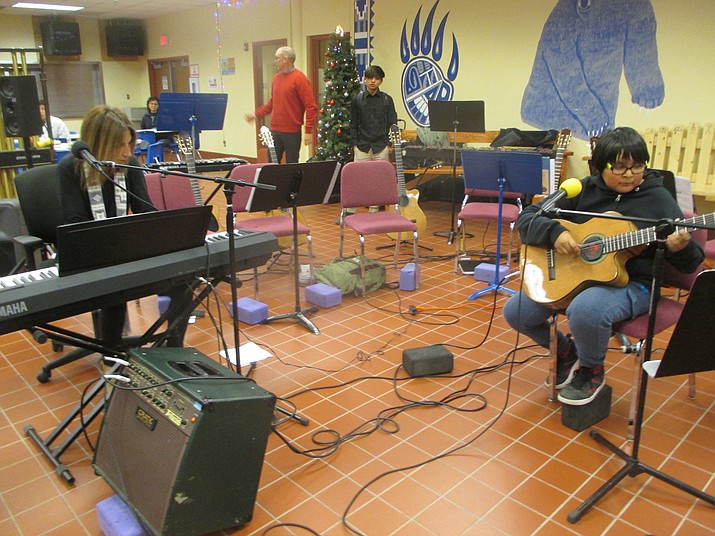 Bogart, who lives in California, called the visit magical because so many wonderful unexpected moments showed up. She said her work with the Hopi High music students traveled in different musical directions as it should be.

“We all learn differently and have our own set of strengths and weaknesses. Embracing them gives us the key to grow and be better than the day before. It’s my joy to help guide them and watch them learn to soar,” she said.

Bogart said she loved every minute of the coffee house.

Bogart said the highlight of working with the students was watching them and hearing where inspiration takes over.

“I was so proud of them…each with their own flavor,” she said.

Bogart said her work with the students could have been improved if there were more specialized classes and if she had more one on one time with the music students. She said she talked about this with her music teacher Tom Irwin. She said more equipment and gear would have been great. Bogart said having the Baldwin baby grand piano tended to would be helpful, but even in its current state, students were drawn to it.

Bogart said she hopes the students were inspired in some way.

“Maybe they discovered who they are and that they can be as good as they want to be,” she said.

Bogart said this visit was as soul moving as her first visit here last school year.

“I have new people to spend time with and now I have friends here. Lucky me,” she said.

Bogart said she is thankful that she has been able to come to Hopi to meet “all of you and more importantly all of you to me.” 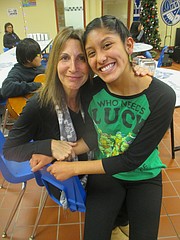 Bogart’s advice to the music students is that they should be themselves, be kind and have fun.

“Everything amazing is on the other side of fear,” she said.

“I’m always excited to work with her,” he said. “Her visit was really needed, at least for me.”

Irwin was happy that Bogart worked with him on a couple of songs and each song she made sure it was like “my own.”

Irwin said the coffee shop show was the highlight of Bogart’s visit and the show was amazing. .

“It was great experience. The crowd was into it. The players were into it and overall it was fun,” he said.

Irwin said the visit would have been improved if the music students had more time to work with Bogart.

“We all benefit from people like her. She’s someone you can learn from every time you hang out with her,” she said. “At the last visit, I only visited with her for a couple days so this time I spent more time with her.”

Irwin said Bogart’s visit was important because the music students needed to get out of the bubble of reading notes on paper and to just have fun. He said he thanks Bogart because she helped him not only with music but with real-life.

“Deanna is a master musician and able to do amazing things with anybody that works with her. Beyond that, she is an amazing person who cares deeply about others and makes others feel comfortable—even when doing things that are new and a little uncomfortable. Deanna is a skilled communicator, musically and conventionally. She is, for all these reasons, a great teacher,”

Kardell, who is also known for her singing, said Bogart works well with the music students because they immediately sense her kindness, patience and skill. She said it doesn’t take long for Bogart to teach a student something and help the student begin to sound great.

Kardell said there were several highlights to Bogart’s visit including watching her develop relationships with students, watching the kid’s excitement as Bogart plays and being shocked that security guard Tonya jumped on the drum set during her last song to play a drum solo which drew thunderous applause from the audience.

Kardell said the students benefited from Bogart’s visit because it was great for them to meet a professional high level musician who is interested in them and what they are doing.

“She brought to a new level the things we had been working on in class such as chords, scales, improvisational tools. She helped the students see the bigger picture in using these tools,” she said.

Kardell said this visit was different from Bogart’s last because there were different students and everyone knew what to expect so Bogart was able to jump right in and have an impact from day one.

“Living way out here, students do not have the opportunity to see and experience live music, especially at a professional level—the way students who grow up in college towns regularly do.. The inspiration and exposure are huge. When students have an opportunity to work and perform with great people like this it changes lives,” she said.

“The students played well and were thrilled to play with Deanna,” she said. “I think I should have saved more time for her to play solo.”

Kardell said having Bogart as the music artist in residence for the week is important.

“We need to continue working on the coffee house concept. A greater variety of participation would be great. The money that we spend on bringing in these big name artists is worth every penny. It is a great experience for students and a great thing to share with the community,” she said.

The mallet ensemble performed “Pink Panther” and “Carol of the Bells.”

The advanced guitar performances included “Moonlight Sonata” by Matthew Bahnimptewa, “O Come all ye Faithful” by Sierra Ramirez, “Love Me” by Christina Shupla, a piano solo by Chan Lim and “Dock of the Bay” and “I Would Rather Go Blind” by Hailey Kardell and Bogart.