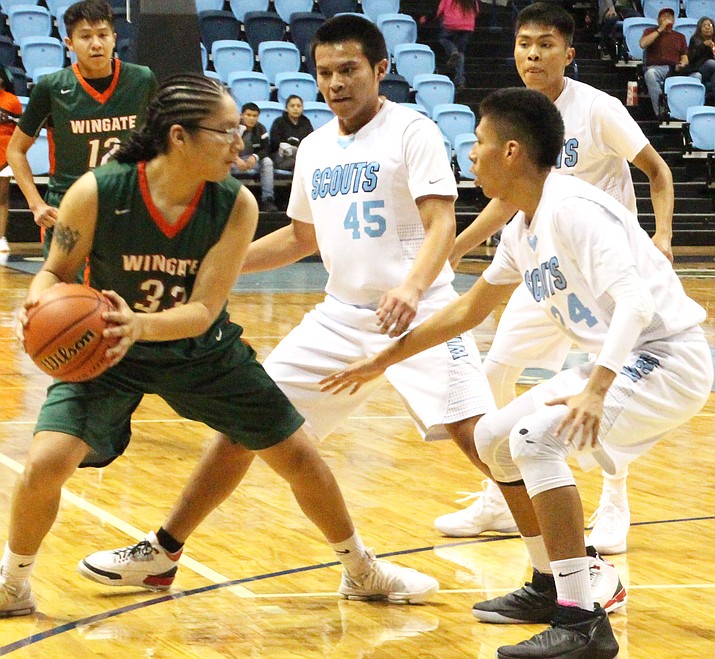 WINDOW ROCK, Ariz. — For the second time this season, the Window Rock Fighting Scouts (2-4) defeated a New Mexico high school coming into the Bee Ho’ldzil Fighting Scouts Event Center by a score of 66 to 48, this time it the Wingate Bears (2-2).

“Were not a run and gun team.” said Al Martinez, Wingate Bears head coach, “We want to control the tempo of the game, control their shooters, contest their three point shots.”

“We want to make them work on defense and limit their possessions,” Martinez continued. “We can frustrate them by holding the ball.”

“We know they are fast.” said Joel Harper coach of the Window Rock fighting Scouts. ”We know their shooters, we are going to keep up with them and play our game. It’s going to be a fun game”

The Scout came out of gates quickly forcing the action with baskets in the paint by Trevor Herbert and Darian Long, for 4-0 start. Parrish Miller and teammate Marvin Moses answered for the Bears for the games’ first tie at 4 all.

Senior Herbert ended the first with a three point basket. Senior Burke Williams started the second quarter for the Scouts, with an NBA range three pointer, the Scouts overcame the Bears’ one point lead and led 14 to 12.

The Bears with scoring by Seniors Myles Whitehair and Ty Norris, gain a three point advantage, 17 to 14, game on. Williams shanked one of two free throws for the Scouts tying the score for the third time, at 17 all, with a little over five minutes left in the second.

The Scouts fourth 3-point basket in the first half made the crowd erupt and glided the Scouts on to a 11 to 2 run, the host Scout led at intermission 30 to 21.

“Play harder and smarter,” Martinez told the Bears, during the halftime break.

“Don’t cause turnovers, get rebounds, control the ball better, “said Harper as the Scouts took the floor for the start of the send half.

Both teams traded baskets, then the Bears’ Taylor Morgan, kick started a 9-0 run with scoring by the Bears’ Trevor Morgan, Miller and Moses, but the visitors still trailed by a point 32 to 33.

The Scouts connected on three pointers beyond the arc, in the third period, and a point from the charity line, totaling a 10-point output, while Whitehair, the Morgans, Miller, Moses and Norris combined for 18 points, but still trailed by a single digit 40 to 39 going into the fourth quarter.

The final quarter began just like the first quarter, after trading baskets, Williams connected with layup basket in the paint.

Wingate answered with a mini run of their own, Taylor Morgan and Tyreke Morris drove the full length of the court and scored in the paint with 6:10 left in the game. For the seventh time in the contest, the game was tied at 44 all.

During the run, the Bears were plagued with a series of back to back injuries, one causing them to lose a key player, senior point guard and captain of the team, Morgan, to a serious injury, causing him to be sidelined for rest of the game.

“We lost a key player, he is hard to replace,” said Wingate coach Martinez, “from that point on, we didn’t play well.”

Destea had a key steal when the Scouts applied a full court defensive pressure that led to a two point bucket, giving the lead to Scouts for good, 46 to 44.

With 4:19 seconds left in game, the Scouts went on a series of runs, one amounting to a 20 to 4 point run for the Window Rock Fighting Scouts that led to the final score of 66 to 48, in the Scouts favor.

During the final run the Scouts connected on eight of 15 free throw attempts, and made 13 of 27 attempts for the game.

“At the beginning of the fourth quarter, I told them, you got to enjoy this game, you don’t do well if you don’t enjoy the game,” Harper said. “Now let’s enjoy the game we love.”

The Scouts were paced in scoring by Burke Williams with 21 points (including 5 three pointers), Corey Silversmith, followed with 12 points, Herbert and Destea had 10 points each.

“We control the third quarter, we kind of lost our composure in the fourth quarter,” said Al Martinez Wingate Bears coach. “We were outscored in final quarter Credit Window Rock. Their ball handlers control the game, with the spread offense. It was a fun game and we wanted to use this game, to get ready for our Holiday Classic.

Myles Whitehair and Parrish Miller led the Wingate Bears with 11 points each.