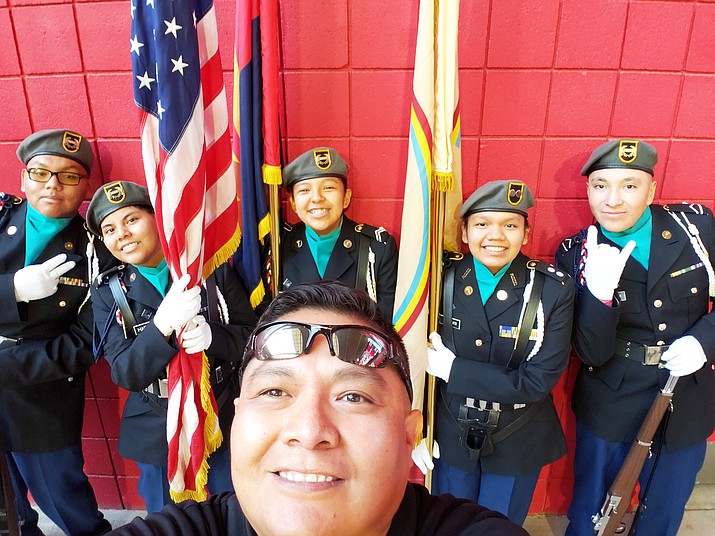 Editors note: Earlier this year Sergeant Marvin Tom and cadets at Pinon High School were asked to represent their school and their country by presenting the colors during the Arizona Cardinals game Dec. 9. This is a first-hand account of the event by Sgt. Tom.

PINON, Ariz. — They were so nervous, the cadets, as we showed up — the sheer size of the stadium was overwhelming.

As we were driving up we saw huge crowds of people that were there for the tail gating that goes on before the game begins. We had some time before we had to meet with one of the staff members of the Arizona Cardinals, so as a group we walked around and saw what all goes on for a tail gate barbeque. As we were walking around, we came across one of the more famous faces of the Cardinal fan base, Danielle Lewis "Ms. Big Red.” She was kind enough to take a couple photos with the cadets before we had to make our way to the ramp that leads down to the bottom of State Farm Stadium.

Before entering the stadium, the cadets were even more nervous — our equipment and uniforms were padded down and inspected by local law enforcement before we were led to our room that was provided to us where we could change and get our uniforms ready to perform before the thousands of fans that were there to watch the game.

We were greeted by a very generous man by the name of Lamont who helped us get around to where we need to go. As time was ticking and the time to perform was quickly approaching, I could feel how tense and nervous the cadets were. The room we were in was so quiet you could hear the fans above us as they entered the stadium and took their seat.

We made our way out to the tunnel area where we greeted Cardinals General Manager Steve Kiems, and Cardinals President Michael Bidwill. Standing there the stadium began to fill and the cadets could see how fast time was going, to the point that it seemed as though we were standing there for several minutes before Lamont was telling us it was show time. We followed him and the Cardinal cheerleaders up a small ramp to get to the field.

I only had a moment to tell the cadets that they had this in the bag and not to worry about a thing — they looked as if they were a deer caught in the headlight but soon they let out a sigh of relief. They knew they deserved to be there and were proud to represent the school. They were soon taken from my side by Lamont as he escorted them to the 10 yard line where they lined up and prepared to march onto the field. As the final Cardinal players were being announced and entering the field, the cadets were on their way as well, marching to their spot on the field near where National Anthem singer, Kailani Mills stood. Time seemed to stand still as the singer performed and the stadium was at a hush but as soon as the song was over the roar of the fans was so loud it was almost deafening to us on the field. We then made our way back to our changing room where we were given tickets to our seats to enjoy the rest of the game. The cadets changed and made our way back up the ramp to the van, then back inside the stadium to our seats where we cheered our home town team.

To make the moments more memorable, we exited the stadium after the game to get a picture next to the statue of former Cardinal player and Army Hero, Pat Tillman who ended his professional football career to serve our country and made the ultimate sacrifice for our freedom.