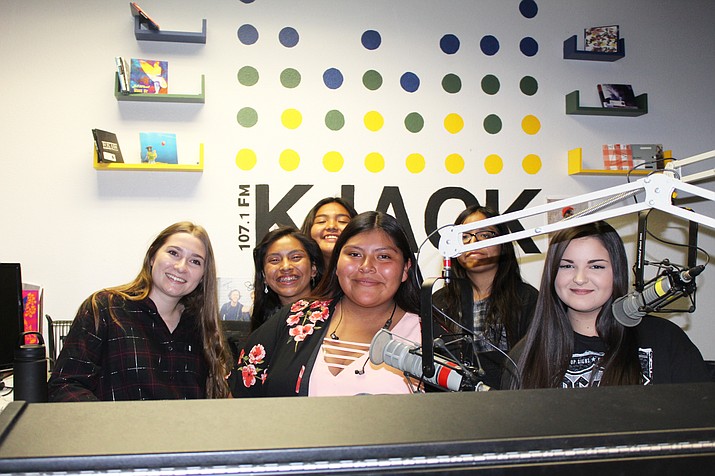 The Hopi High media students also visited the Virtual Reality lab as they learned about that program. Virtual Reality is the computer-generated simulation of a three-dimensional image or environment that can be interacted with in a seemingly real or physical way by a person using special electronic equipment, such as a helmet with a screen inside or gloves fitted with sensors.

Gabe Fredericks, a video student at Hopi High, said he loved going to NAU since it is one of the colleges he is considering attending.

“I love the environment and the people. The journalism building was fun because I was able to see the inner workings of a newspaper and a newscast. It gave me hands-on experience and I was able to feel like I was part of the set,” he said.

Fredericks, a senior, said the Virtual Reality experience helped him see the world in a different way.

“Virtual Reality is a medium that hasn’t really been tapped into yet, and I want to see what could come out of it,” he said. “This certainly makes me want to do more with media. I feel like the people’s stories should be told through whichever medium. I love video and it’s a way I can tell other stories. I am interested in broadcast journalism.”

Kiiyahno Edgewater, a print journalism student at Hopi High, said the visit to NAU communications was amazing because he had a chance to experience the college campus and see what journalism is like on the university level.

“I had a chance to see how the college newspaper is put together,” he said.

Edgewater said the Virtual Reality program was a good experience for the Hopi High media students to learn about. He said the NAU experience encourages him to do more with digital media at either NAU or Arizona State University.

Isabel Anzures, a video student and a junior at Hopi High, said the broadcast that NAU students were working on was fun, especially since the Hopi High students had a chance to go on the live set.

“There was so much information and so much they had to do in order for the broadcast to come out great,” she said.

She said the Virtual Reality program was by far the most fun.

“It was an experience I really enjoyed,” she said. “Being able to create virtual reality games is in a way kind of hard if you don’t already know how to do it. But it was really fun and interesting. It was my first time actually working at VR games and how to use it.”

Students said the highlight of the trip was when Hopi High media students were able to go on the live NAZ broadcast at NAU.