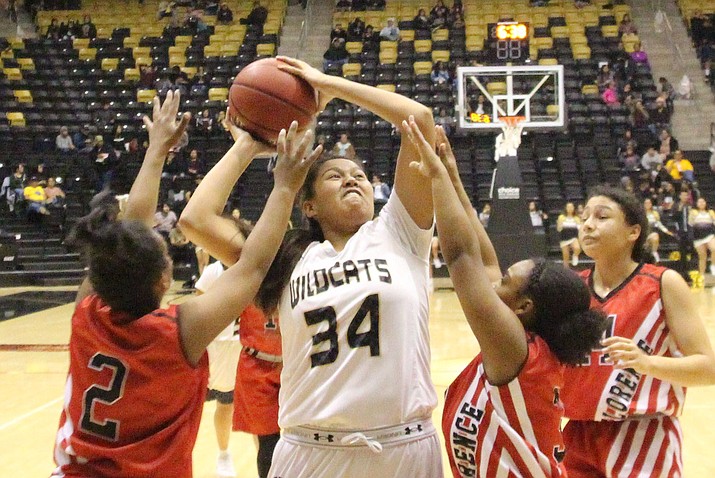 Chinle Lady Wildcat Junior Post Tea Murray (34) attempts a shot in the paint, while being triple teamed by the Lady Gophers of Florence. The action took placed during the girls championship game of Choice Classic held at the Chinle Wildcat Den. Chinle handily defeated the Florence Gophers, 80 to 34. (Anton Wero/NHO)

CHINLE, Ariz. — The Chinle Wildcats defended their home court, with the boys winning over the Blue Ridge Yellow Jackets at the Choice Classic, 56 to 52.

The Lady Wildcats cruise through the Choice Classic with three wins and seized the girls championship title with a 80 to 34 score. 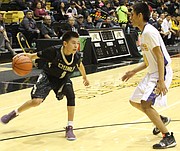 The Chinle Wildcats boys had to play three games in one day to claim the coveted championship trophy.

Earlier in the day the Chinle boys were upset by the Blue Ridge Yellow Jackets in the quarterfinals of the tournament, 71 to 64, sending them into the third place game with the Window Rock Fighting Scouts.

The Wildcats were able to overcome a halftime deficit and defeated the Window Rock Scouts by a score of 66 to 61 to advance to championship game.

“We didn’t play our best against Blue Ridge in the morning game,” said Wildcats head coach Raul Mendoza. “I am hoping we learn something from our loss and play better.”

“We teach them to learn from our mistakes, play tired both physically and mentally, to overcome fatigue,” Mendoza continued.

Chinle was down by a point to start the final quarter; Chinle and Blue Ridge traded baskets and the game was tied four times before Chinle’s Curtis Begay connected on his third three pointer of the game, giving the Wildcats a 53 to 50 advantage with 3:08 showing on the game clock.

On the next possessions, the Wildcats spread the floor and milked the clock, running a basic four corner offense. With a minute and 42 seconds left, Begay drove the paint and was fouled. He connected on an old fashion three play for a six point lead, 56 to 50.

After several miscues on three point shot attempts, Blue Ridge’s RJ Tate was fouled behind the three point arc and hit on two of three free throws to cut the lead to 56 to 52 with a minute and 23 seconds left. Chinle then inbounded the ball and ran out the clock, final score 56-52, for the win.

In the first quarter, Corey Endfield hit a basket in the paint for quick lead for the Blue Ridge Yellow Jackets. Copper Burbank answered for the Wildcats, tying the game at 2 all.

“We need to pick it up on offense and play better defense, not like this morning,” Burbank said.

Chinle went on another run, 16 to 11, with baskets by Burbank, Begay, Colin Yazzie and Angelo Lewis. The Yellow Jackets answered with scoring by Tate, Endfield and Darien Burnette, but still trailed 30 to 24 at the intermission break.

The third quarter saw the Yellow Jackets with mini runs of 6-2 and 10-6 while the Wildcats’ Burbank hit on three two pointers and finished with a trey with a minute and thirteen seconds left in the quarter. Blue Ridge took a 42 to 41 lead into the final and decisive period.

“We did a better job rebounding, taking care of the ball,” Mendoza said after the win. “(It was a) good team effort, pleased with our effort.”

Burbank led the host Chinle Wildcats with a game high 26 points; he was voted by coaches as the Tournament Most Valuable Player. Begay added 16 points for the Wildcats.

“He is too good (talking about the efforts and play of Chinle’s’ Copper Burbank)” said Blue Ridge Yellow jackets head coach Darryl Subu. “We need to get better, get competitive — it was a well contested game.”

Endfield scored a team high 17 points, followed by teammates Tate with 16 points and Burnette with 13 points. 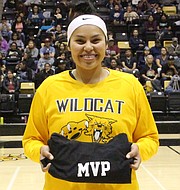 Stacey Begay is voted the the Most Valuable Player of the Chinle Lady Wildcats Championship team. (Anton Wero/NHO)

The Chinle Lady Wildcats were three for three in the Chinle Choice Classic.

In the first round they upended the Red Mesa Lady Redskins 62 to 43, then beat Many Farms by a score of 62 to 34, advancing the Wildcats to the championship game.

After spotting the Florence Lady Gophers a 5 to 0 lead, the Lady Wildcats, behind the post play of Stacey Begay (voted the Chinle Choice Classic Most Valuable Player), Grayce Claw, Delteebaa NaCona and Brandii Claw combined for a 20 to 2 run and never looked back, cruising to a 25 to 7 first quarter lead.

The Lady Wildcats’ other post player, Tea Murray, played a lead role in the paint; the offensive efforts of Deshawna Yazzie, Meishyla Begay, Aisha Ashley and Begay combined for 27 points while holding the Lady Gophers to 13 points. At the half, Chinle lead by a score of 52 to 20.

With the outcome of the game not in jeopardy, the Lady Wildcats began subbing freely in the three final quarters. Chinle lead 68 to 24 at the end of the third quarter and journeyed to a 80 to 34 final score, claiming the Choice Classic championship trophy for the host Lady Wildcats.

“Our post game and height game was dominant, our bigs just got confident in the paint,” said second-year head coach Francine McCurtain. “This tournament built a foundation for us. I will look to our veterans (juniors and seniors) to contribute to the second half of the season.”

Stacey Begay had a game high 24 points, followed by Tea Murray and Aisha Ashley with 14 and 10 points respectively.