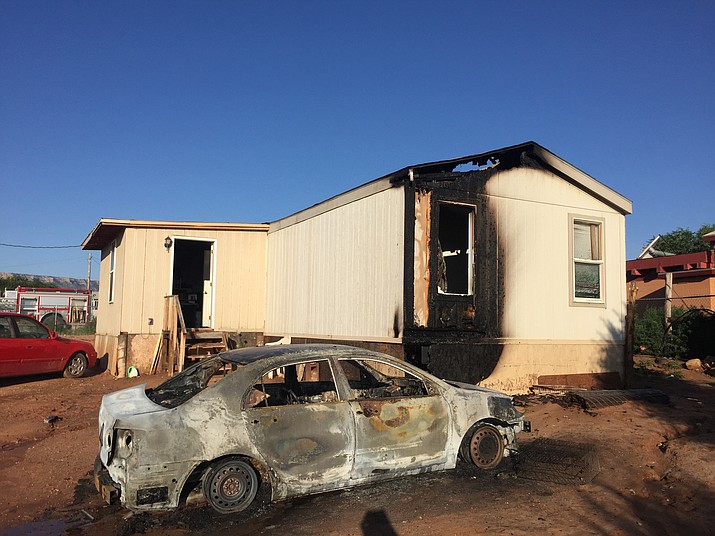 Celeste Gilman, Miller’s daughter, said in June 2015 the Miller family was tending to their crops in Narrow Canyon near Kayenta when someone lit Gilman’s now husband’s car on fire. The car was parked near the trailer and the fire became so intense, the flames jumped over to the trailer.

The fire burned the northeast side of the trailer, the far bedroom and then spread rapidly into the area between the ceiling and the roof.

One of Miller’s relatives drove to Narrow Canyon and told the family there was a fire.

“We got up and left back to Kayenta,” Gilman said. “By the time we got there, my husband’s car was burned down to the metal frame, even the windows melted, and there were firemen on top of the roof spraying water in [the area] where the fire was spreading.”

Despite the damage, Miller still lives in the house.

“Yes, she is still living in it,” Gilman said. “We did put her up in her mother’s old concrete covered, dirt floor hogan a few months right after the trailer burned, but she didn’t like staying there, especially in the winter because of all the spiders and the cold walks to go to the restroom in back of the trailer.”

The family set her up in the kitchen/dining area of the trailer, where the walks to the restroom are not as long or as cold and she is safe from other elements.

The burnt out living room of Mary Ann Miller’s trailer near Kayenta, Arizona. Miller has continued living in the trailer after the fire in 2015. (Photo/Celeste Gilman)

“Kayenta’s Hill area has gotten real bad with crime and break ins over the past few years,” Gilman said. “Thieves have broken into her shed several times. Two months ago, they burglarized her home, breaking in while she was inside. It was a scary and alarming incident and luckily she wasn’t hurt in the break in.”

Gilman said the thieves came in through the front window and Miller chased them out the front door.

“Why anyone would break into a house under renovation is beyond me,” Gilman said. “People in the neighborhood know my mom’s situation and that her trailer was partially burned. My mom insists on staying home to protect her home and her pets. However, her situation isn’t ideal. She is confined to a small living space while part of her trailer is under major renovation. Due to our financial constraints, we aren’t sure when we can complete these necessary tasks.”

Gilman is a full-time teacher in Navajo, New Mexico and her brother works full-time and lives in Phoenix. They are only able to make a few trips out of the year to work on their mother’s trailer.

“Since my brother is experienced in construction, ironworking and cable/internet wiring installation, we have to wait for

Repairs are made to the ceiling of May Ann Miller's trailer. Miller's family has been repairing the trailer since the 2015 fire. Miller continues to live in the trailer. (Photo/Celeste Gilman)

him to make a trip back to Kayenta in order to work on the major repair projects,” Gilman said. “My mother basically has just my brother, me and my husband to work on her trailer for her.”

The family was able to get some help from Teach For America, which Gilman is a corps member of, earlier this year. A group of TFA Corps members helped the family take out the ruined installation and drywall from areas affected by the fire.

In addition, Miller requested help from the Kayenta Chapter, which was only able to give $200 to replace personal items Miller lost in the fire.

“I had asked Kayenta Township to at least help with installing privacy slots in the chain link fence that goes along the main road, but they were not able to even help with that,” Gilman said adding that the Township had installed privacy slots along the entire road when it was first put in, but her mother had declined to have that put in at the time. “We also sent an email to Navajo Housing Authority requesting help at least with resources or organizations who could help us, but we have heard no response from them yet.”

Despite all that, in the intervening years, Gilman said, she, her brother and her husband have been able to fix many things on the trailer.

They also have received some help through the gofundme page from family, friends and colleagues. Those people have donated about $3,420 and the family

“However, I think I have exhausted support from these avenues,” Gilman said.

Gilman and her husband have made around 10 trips since October to Kayenta to help her mother get ready for winter. But with Gilman’s husband out of work — he is a U.S. Army Combat veteran — the family does not have money to buy supplies, materials and even to make the trip to Kayenta.

Miller, who is a devout Christian, dedicated 15 years to teaching elementary and middle school in the Kayenta area. She began to lose her hearing in the classroom in 2012, and was unable to continue teaching. She retired from teaching and now lives off of her social security, which is enough to pay her utility bills, purchase food and get a few supplies.

“Through all her obstacles, my mom remains optimistic,” Gilman said. “People describe her as young at heart and she’s lived her life as a working woman.”

But the fire has made her life harder.

“The state of her trailer in disrepair makes her life considerably difficult,” Gilman said. “Since her trailer isn’t fully insulated, the trailer heats up to dangerous levels in the summer. The winters in Kayenta are harsh and freezing cold.”

Gilman said the family is doing their best to insulate the trailer with materials they have purchased when they have the time and the money. But they need some help.

More information about Miller’s story, the burned trailer and to donate are available at https://www.gofundme.com/rebuild-mary-ann-miller039s-home.