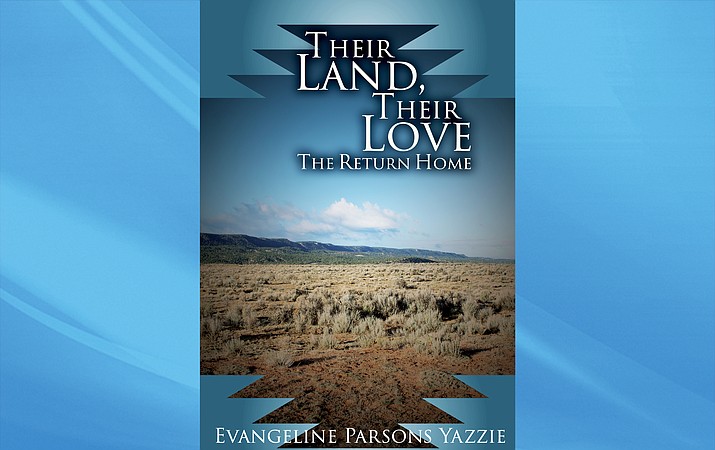 FLAGSTAFF, Ariz. — Evangeline Parsons Yazzie’s new book “Their Land, Their Love: The Return Home” is the last book in her “Her Land, Her Love” series and is available at Salina Bookshelf in Flagstaff.

Yazzie said she knows this is the book her audience has been waiting for — and people would get upset waiting because they knew the Navajo people did not stay in Fort Sumner and they would ask why Yazzie just left them there at the end of the third book.

“I knew they wanted the people to come home so badly,” Yazzie said. “I didn’t want to give the whole thing away either. I wanted anticipation and build up.”

Yazzie said the whole series was written from 1991 to about 1999 as she would write occasionally. She would keep adding to the story over those years.

“It became a real long novel and I just thought no one wants to read all of this,” Yazzie said.

The editor and publisher at Salina Bookshelf decided to make it into four stories.

Yazzie said the reason for the books was to share with Navajo youth the truth about their history as told by their Navajo elders and also to inform Navajo youth about the strength of their ancestors and the Navajo people.

“It was to present the painful history of the Navajo people from an unusual viewpoint — that of a love story,” she said, “It was to inform Navajo youth about the strength of love in terms of survival of an individual, a family and of a people and finally, it was to instill within Navajo youth and Navajos of all ages pride for their people, knowing they come from strong stock.”

Now that the fourth book has been published, Yazzie feels her goals with the stories have been accomplished.

“I wanted to leave a really good foundation for Navajo youth so that they could learn the truth of their history from the standpoint of their elders, the ones who had heard it firsthand from their own elders,” Yazzie said.

That history is closer than people realize. While Yazzie used to hear people say my great, great, great, grandmother told this story, she would think that was a long time ago, but when she started researching for her story, she realized it is only two generations back.

“As we sat down and began to think about how my maternal grandmother came back, we realized it wasn’t really that long ago,” Yazzie said.

At a recent book signing at Salina Bookshelf, Yazzie said she received a great reaction to her book.

“Some of them asked me if they could give me a hug and they would just start crying,” Yazzie said. “One lady said, ‘My mother and I haven’t talked much and I read the story and I bought her a copy of your book and now, because of your book, we weren’t talking about personal problems, but about history and now we’re talking.’ So it’s putting people together.”

Yazzie said one of the most pleasing things is hearing about books clubs that are reading her book.

Some relatives of Yazzie’s attended the book signing, too.

“It was so good to see them,” she said. “I think people felt the sense of the power of the Long Walk and the strength of the people there in Salina Bookshelf. I’m not saying that was because of me, it was the story of our elders is where the power lies. I was just the conduit to bring it about.”

Yazzie said when she read about the Long Walk in history books, those stories always missed the Navajo voice — specifically the way Navajo people speak and expressed themselves in Navajo.

“Many of the people that I met with to talk about the Long Walk did not speak in English,” Yazzie said. “They talked about it in Navajo. And so it had to be written in English and Navajo. And I think that’s where the power is.”

Yazzie recalls people telling her that they were surprised at the way the English in the book sounds, that it was not correct or that is was off. Yazzie said during her translation of the words from Navajo to English, not everything fell into grammatical lines because of the way Navajo is spoken and she left it that way deliberately.

“I really wanted to have people have that feel of Navajo. I had other people say, ‘This is the way my grandmother speaks.’ Because they are thinking in Navajo and speaking in English. If people don’t like the grammar as a translation, I don’t care,” Yazzie said.

The books have touched people and sparked memories partly because of the Navajo spoken in the book.

While this series is finished, Yazzie is not done writing. She is working on a boarding school story — she has the framework down and the historical events logged out, but she needs to fill in the people.

“It still affects us today, as a people, across the United States, not just Navajo,” Yazzie said. “It will be historical fiction, but it will be based on three people.”

Because of constraints within her profession — Yazzie is still a professor emeritus at Northern Arizona University — she would have to go before a review board at both NAU and a Navajo IRB if she wanted to ask personal questions of people she was interviewing. She would need to present her research to those boards and they would have to approve her work. It would be a year to two year process.

Instead, Yazzie said she will rely on the memories of two people who are very close to her.

“Our stories don’t have that long, that much time in order to be told,” Yazzie said. “They need to be told, our youth need to know.”

Yazzie said that is the importance of telling these stories. The Long Walk affected almost all Navajo people. Yazzie’s generation heard it first-hand.

“But that was just one Indian Nation that was affected,” she said. “With the boarding schools, it is across the United States.”

The book will be based on three generations because Yazzie needs to interject different events in history with two people who are almost the same age.

“If I told both of their stories at the same time, I couldn’t tell Navajo history as it moved along,” Yazzie said. “So I have to make one much older. People will be able to identify with this. I can’t wait to start work on it.”