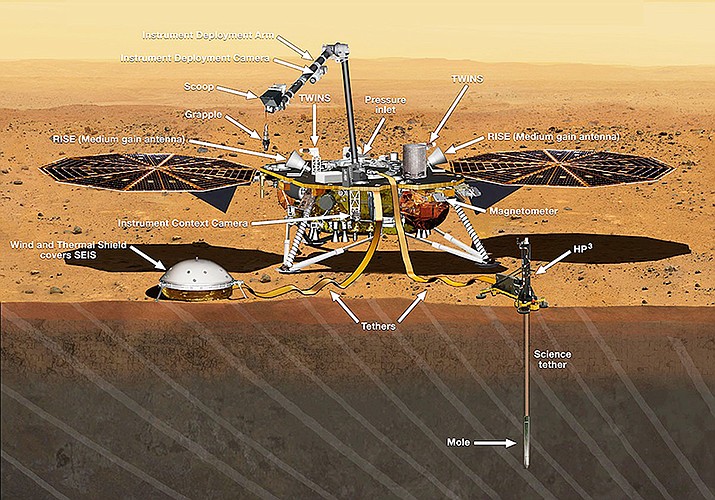 The InSight spacecraft landed on Mars Nov. 26. Aaron Yazzie (below), who is Navajo, built the pressure inlet, a part of the auxiliary payload sensor subsystem on the spacecraft. (Photo Courtesy of NASA/JPL-Caltech/Lockheed Martin Space)

FLAGSTAFF, Ariz. — Aaron Yazzie sat with other NASA engineers holding his breath and hoping the spacecraft would survive the landing on Mars a few days ago. And it did.

This is the eighth time (ever) NASA has landed a spacecraft on Mars. It is the next step in sending astronauts to the moon and Mars in the future, and may rewrite textbooks.

A million thoughts ran through Yazzie’s mind before and during the seven-minute landing phase. He kept Twitter updated during landing day — and when it left Earth six months ago.

“A lot could’ve gone wrong and a lot of work that I had done for many years could have blown up and crashed on Mars. That would have been really sad,” Yazzie said over the phone from Pasadena, California. “But it all went really well. I was really happy.”

The InSight, or Interior Exploration using Seismic Investigations, Geodesy and Heat Transport, spacecraft is the first spacecraft to study the core of the red planet. Or as NASA likes to say, they want to study the “vital signs” of Mars. The company wants to accomplish two goals on this mission: to find out more information about the formation and evolution of Mars and look at the tectonic activity and impact of meteorites on the red planet.

The 32-year-old built the pressure inlet, which is part of the auxiliary payload sensor subsystem and functions as “the eyes and ears of the lander,” he said. Yazzie’s piece works with the pressure sensor that another engineer designed. The entire auxiliary system tells the lander the temperature, pressure difference (Mars has thinner air) and if wind is blowing. During the two-year mission, his hardware will monitor the planet’s static atmospheric pressure and filter out the Mars wind. The more still the air is, the better. This allows scientists to retrieve accurate readings.

Missions before studied only the surface of Mars, such as the soil and canyons, according to NASA. Mars is a rocky, or terrestrial, planet like Earth, Earth’s moon, Mercury and Venus. They’re the same type of planet. Mars and Earth share similar interior structures: crust, mantle and core. But if these are all rocky planets, why are they so different? That’s what scientists hope to find out. The information scientists’ gain will ultimately tell us how Earth formed.

“It’s really exciting to learn about Mars because we’re learning more about ourselves and our land and where we came from,” Yazzie said. He often jokes about how Mars looks exactly like the Navajo reservation if you look at Tuba City or the rock areas around Monument Valley. They’re both red.

The Holbrook-raised engineer has worked for the NASA Jet Propulsion Laboratory for 10 years.

Before this big project, the Stanford University alum tested, designed, and built hardware meant for Earth. And then came his first flight delivery and first flight project. (Again, a first and it went to Mars.)

Between 2012 and 2014, he designed, worked on, tested and attached it to the lander. On social media, Yazzie said he was giving his 2014 self a high-five for the hard work.

Initially, the mission was set to launch in 2016, but an issue happened with another piece of equipment, he said. So NASA had reschedule the mission for 2018.

“Mars and Earth get close to each other every two years,” he said. They wanted the two planets to be as close as possible in orbit.

Once the spacecraft familiarizes itself with Mars, you’ll get to see Yazzie’s work exposed. That’ll be within a few weeks, according to surface operations timeline. His device sits on the top deck of the lander and hides under the big white dome structure, also known as the wind and thermal shield. When the robotic arm takes off the shield, you can see a “stack of discs” that makes a tower in the center of the white ring. That’s the masterpiece.

During Thanksgiving, he told his family back in Holbrook, Arizona, about the project and landing but the scope of it didn’t hit them until they saw it on the news. When mission control got confirmation of the landing, he texted his family,

Aaron Yazzie, middle, tweeted, ‘Some of the Mechanical engineers for @NASAInSight are here and ready for touchdown! Nick designed the grapple, Liz did environmental deploy testing, Milo worked on the proposal, Enrique was the designer/configurations lead, & I designed the Pressure Inlet #MarsLanding’ on November 26, 2018 from Pasadena, California. (Twitter)

“Landing successful!!! I have stuff on Mars!!!” His younger brother, Jared Yazzie, the founder of OXDX Clothing, shared the text message on his Instagram story.

Part of Yazzie’s job is receiving jobs and delivering them, such as the pressure inlet he designed. Even though he won’t have an active role in in the entire mission he will “definitely keep tabs and make sure it works and do what it’s supposed to do.”

What surprises him the most about his role in the historic mission is not too long ago Navajos were far from western education. His grandparents were traditional, off the grid and not part of western education.

After a 30-minute conversation and eight hours of celebrating, the dubbed ‘Indigenous Bill Nye’ reflected on his experience that many Native peoples in higher education and the professional world have previously shared: feeling like an imposter.

He went from a small town in Arizona to Stanford, which was a culture shock for him. The low rates of Native students graduating from high-school and college graduation make students feel lonely in higher institutions. That lonely feeling grows with the extremely low number of Native students in science, technology, engineering, and math. You feel so different.

“I always felt behind the pack and trying to catch up and trying to prove that I belonged in that field and that college. I struggled through it. Made it through,” he said. He graduated, completed internships and found his current job.

The same cycle happened. Imposter syndrome sunk in and he felt he need to prove he belonged there.

But this mission brought him “a lot of validation.”

“It’s not until now that I finally feel like I am a full-fledge NASA engineer. I made it. I did it,” Yazzie said. “I’m not an imposter anymore. I’m doing it.”

NASA launches Mars rover to look for signs of ancient life
Crossing over the thin blue line: The only Native American astronaut encourages <br>students to seek careers in space<br>
From Navajo Reservation to NASA
NASA lands at Meteor Crater
First Native American in space reflects on his journey
Event Calendar