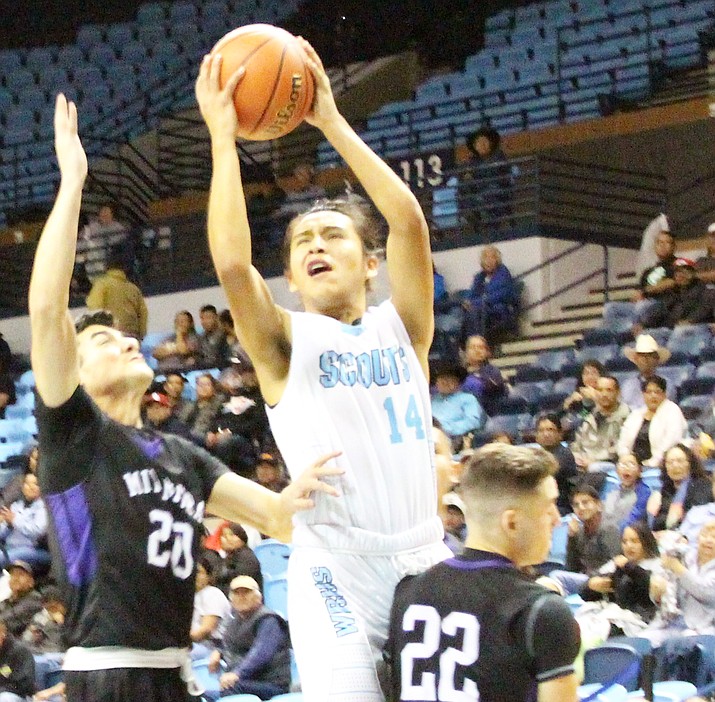 The Lady Patriots earned their first win on road 66 to 48 over the host Lady Scouts.

“We got to keep up with them, play smart,” said Window Rock Scouts head coach Joel Harper. “We played Sanders the other day, we didn’t play our best, so tonight we hope to find our defense and play our best. Gallup (Miyamura) is a well-coached team, they know what we are made of and we know what their made of, they are a great team and well-talented.”

The Scouts’ Trevor Herbert and Burke Williams got the host started with a 5-0 run before Almad Owens answered with a bucket in the paint, for the Patriots. Both teams traded baskets during the opening quarter. The Scouts manage a 11-7 lead as the first quarter ended.

The Scouts kept the defensive pressure up in the second period; a three by the Scouts Derain Long with over six minutes left heightened the hopes of the crowd for a win, Herbert also drained a trey to give the Scouts a 26 to 19 lead at intermission.

The third quarter belonged to the visitors, as the Patriots opened with 10-0 run, giving them the lead 29-28 and finished with a 5-0 run at the end of the third quarter and led 34-30.

The final quarter was one quarter to remember.

The Scouts could not convert at the charity strip, hitting only 6 of 11 free throws and three contested buckets. The Patriots hit on three driving lay ins and made seven of 10 free throws. The Patriots could have iced the game, but Jarron Cadman failed to hit two free throws.

The Scouts called a full time out with 9.8 seconds left in the game to set up a final play, a much needed three pointer. As the Scouts ran the last play, Adrian Destea got opened and launched a despairing shot with no time left, hitting nothing but net, sending the crowd into a February like frenzy. The game ended tied at 47 all and was sent into overtime.

In the extra quarter, the Patriots outscored the Fighting Scouts 10 to 2 to secure their first win of the young season.

“Gallup (Miyamura) have a great game plan, it showed throughout the game, all the way through the overtime,” Harper said. “They have young players who blossom over the summer, they did a good job tonight.”

Herbert led the Scouts with 15 points.

“We wanted to come into the game and play up tempo, we wanted to push the tempo, a little bit,” said Joshua Dupont coach for the Lady Patriots of Miyamura, “We want to get out there on defense.”

The Lady Patriots, led by Autum Enote and Malia Ukestine, came out in the first quarter and led by a signal digit 15 to 14.

The Patriots continued to push the pace offensively, outscoring the host 12 to 10 and led at the half, 27-24.

“I told the girls in the locker room, we have to play better basketball in the second half,” Dupont said. “So, we did have a better second half.”

The Lady Patriots picked it up quickly outscoring the Lady Scouts 17 to 11, with 7 points coming from Noelle Charleston and Odessa Begay contributed 5 points in the third quarter. The Lady Patriots held on to 9-point advantage, going into the final frame 44 to 35.

Miyamura Lady Patriots’ Begay scored 10 of her game high 19 points in the final quarter as the Patriots cruised to a 18 point win 66 to 48.

“I thought Window Rock came out in the first half and competed, they tested us, they came out with a little of a rhythm,” Dupont said. “We settled down in the second half and overall I was pleased with girl’s efforts to find a way to win.”