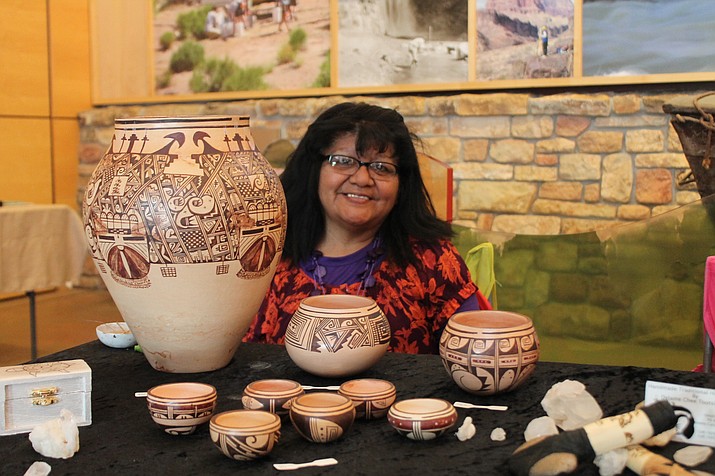 TUSAYAN, Ariz. — Through all the hard times in Delaine Tootsie-Chee’s life, pottery has been the thing that got her through. Passed down from family members in her clan, forming earth into beautiful painted pottery has been her calling since she was a young girl.

Tootsie-Chee displayed and sold her works at the Grand Canyon Visitor’s Center Nov. 14 as part of the park’s celebration of Native American Heritage Month. Even though she’s held other jobs, including a dental technician for children with special needs, Tootsie-Chee said she’s always come back to the pottery.

It’s not just artwork, it’s a way of life, from digging the natural clay out of the ground, making the pigments and shaping the pots with her hands and tools that have been passed down through generations. Nampeyo, the famous potter who resided at Hopi house in the 1900s, is her ancestor, and Tootsie-Chee carries on the tradition as closely as possible.

All of her materials are natural, and with few exceptions, she gathers them herself.

“I dig the clay — it comes in a hardened rock — then I grind it down and add water until it becomes soft and workable,” she said. The clay comes in shades of white,

gray, red and yellow, with white and yellow varieties also serving as the paint she will use later in the process.

Tootsie-Chee uses the Hopi’s traditional coil method, shaping and smoothing it with her hands and a rough sandstone tool before beginning the finer polishing process. To polish the pieces, she uses river stones with different levels of smoothness. The stones she uses have been handed down to her through many generations of her clan. She burnishes each piece with only water and stone until it’s perfectly smooth and polished to a bright shine.

Once the piece is polished, Tootsie-Chee begins designing and painstakingly painting intricate Hopi symbols and artwork. Her pigments are also natural, mostly distilled from wild spinach and cedar greens. To get the pigments, she boils the plants until they release their natural liquid, which she then boils down further until it thickens and becomes resin-like. She then takes the pigment and scoops it into corn husks to dry for later use. When it’s time to paint, she breaks off a small piece of the dried pigment and mixes it with water to make a liquid resembling coffee. She then takes a rock and rubs raw hematite into the paint.

“The raw hematite gives it a richer color, a nice dark brown,” she said.

The wild spinach pigment is nearly block, while the cedar greens give a softer brown and the white or yellow clay give faint pigments of their natural color. The red paint comes from her Grand Canyon neighbors, the Havasupai. The red pigment comes from a rock found in Havasupai Canyon, which they then trade to the Hopi.

Tootsie-Chee, like her ancestors, doesn’t use a typical paintbrush on the intricate designs — she uses a fiber from the yucca plant. By grinding it between her teeth, Tootsie-Chee teases out the fibers one by one until the strand she uses to paint with is no thicker than a small blade of grass.

“We would take the yucca leaf and chew it, grind it in our teeth, separating it,” she said. “There are some who can get strands as thin as a camel’s hair.”

With yucca fiber in hand, Tootsie-Chee dips it in her pigment and drags it over the surface of the pot, letting the lines and swirls form organically. It’s hours and hours of work and contains meaningful and intricate figures of lightning, Orion’s belt or the swirling vortex that leads to the home of the god Maasaw.

Once she’s finished, she fires the decorated pottery in a traditional sheep’s dung kiln, which will be used only once. The result is a soft, light tan colored treasure, which Tootsie-Chee says are meant to be used as spirit bowls.

Spirit bowls are a form of comfort in Hopi families, as well as a way of honoring loved ones who have passed on.

“The spirit bowls are a way of taking your burdens and releasing them,” Tootsie-Chee explained. “When dinner is served, before the family eats, they take small pieces of food and put them in a bowl for lost loved ones who are no longer at the table.”

When the meal is finished, that bowl is then taken outside to the west side of the property and released back to the Earth, where it will nurture and feed other living creatures.

It’s a process she explains to those who come to visit as she works outside the Hopi Cultural Center in Polacca.