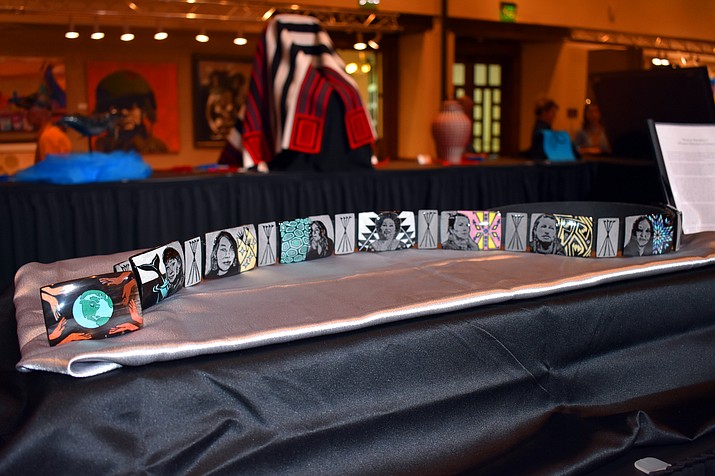 The 2018 Best of Show winner at Santa Fe’s prestigious Indian Market was an Elkhorn belt, priced at $50,000, made by Lakota artist Kevin Pourier. Titled “Winyan Wanakiksin”, which means women defenders of others, the belt was an exquisitely detailed carved piece that took the entire summer to carve. (Photo/Rosanda Suetopka Thayer)

Best of Classification for Pottery went to Nancy Youngblood from Santa Clara Pueblo. The meticulously done piece had 35 separate swirls of coiled blackware clay that spun up into a high shouldered vase shape. The coils went all the way from the base into the inside of the pot in completely even seams. (Photo/Rosanda Suetopka Thayer)

Pourier, who is of Lakota descent, titled his carved Elkhorn belt piece “ Winyan Wanakiksin,” which means defenders of others. Eight Native women’s faces and corresponding personal backgrounds are carved next to each profile.

Priced at $50,000, it took Pourier the entire summer to carve his piece using both traditional carving and inlay methods he has been using for the past 28 years.

Pourier chose the Elkhorn because it is a natural art element used by his Lakota ancestors.

The eight selected Native women featured on the carved belt have distinguished themselves in advocacy, politics and the arts.

They are Tipiziwin Tolan of Dakota and Hunkpapha Lakota descent; Susie Silook of Yupik, Inupiag and Irish descent; Mary Kathryn Nagle of the Cherokee Nation; Wanda Batchelor of the Washoe Tribe of Nevada-California; Jodi Archambault-Gillette of the Lakota Nation; Roxanne Swentzell of Santa Clara Pueblo; Suzan Harjo of the Cheyenne and Hodulgee Muscogee Nation and Bobbi Jean Three Legs of the Hunkpapha Tribe.

Pourier, from Scenic, South Dakota, has participated in the prestigious Indian Market for the past 21 years.

“The black, the shininess of the horn, for the Lakota people, the buffalo spirit lives in that horn cap,” Pourier said when giving more detail about his work at the Best of Show luncheon held for all the winners at this year’s market.

So many detailed intricacies are incorporated into his belt piece that it is necessary to look closely to see them.

Between the intricate facial carvings are smaller vertical rectangles. There are also over 1,400 tiny dots individually formed with a carving burr.

The belt buckle on the piece features a globe with four sets of different colored hands.

“The earth motif represents all of us, our Mother Earth had to be on there,” Pourier continued.

“I was really inspired by the time that my wife and I spent time together at Standing Rock Indian Reservation last year,” he said. “It was the site of where the protestors were united against the construction of the Dakota Access Pipeline. The Native women protestors showed such courage and power. But it wasn’t just about those particular women, my belt really represents all women all over the world.”

Winning Best of Show at the Indian Market is the dream of Native artists who participate in the heavily juried Native art competition, one of the most prestigious and largest in the world.

Since 1922, over 100,000 visitors and collectors from all over the world, converge upon Santa Fe to see and buy the highest quality Indian art directly from the artists.

Over 1,000 Native artists from more than 200 federally recognized tribes are represented in the show, which is sponsored by the Southwest Association of Indian Art (SWAIA) annual show.

Wilson, along with Elizabeth Kirk, who serves on the SWAIA board, were at the Best of Show Luncheon and honor ceremony Aug. 17 to present Pourier with his winning ribbons and also the $10,000 Dobkin Family Foundation Award.


This year’s top winners were: