NAU speaker encourages Hopi High students to give back to community 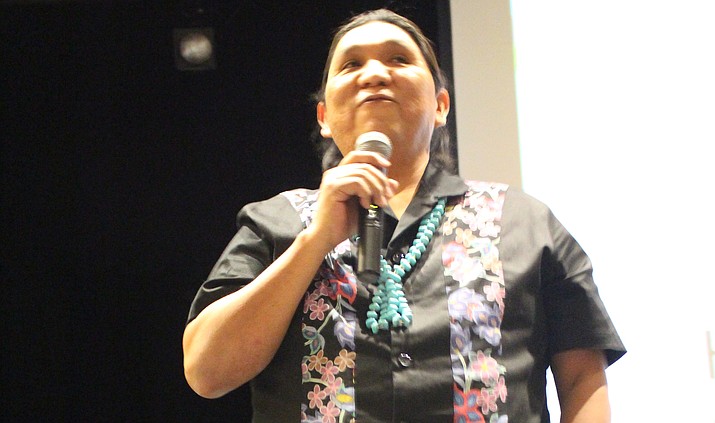 POLACCA, Ariz. — Darold Joseph, who works at the Institute of Human Development at Northern Arizona University, recently spoke to the students and staff at Hopi Jr/Sr High School about the upcoming school year.

Hopi High Principal Lynn Fredericks praised Joseph as a good role model since he has earned his doctorate in special education.

“Hello to the staff and thanks for taking care of our children,” Joseph said. “It means a lot to be present, to be here, to listen and understand and find some meaning.”

Joseph, who used to head up the special education department at Hopi Jr/Sr High School, recounted how he grew up in Moenkopi. His mother was from Moenkopi and his father was from Shungopavi. He said the Hopi Villages have been here a long time. He lived in Flagstaff at first because his mother was a student at NAU. Once she graduated, they moved back to Moenkopi and Joseph attended Tuba City Primary School.

“I was involved in ceremonies,” he said.

Joseph said that it was a long drive from Moenkopi to Hopi High School, which he attended after primary school. When he was attending school in Tuba City, he said there weren’t many Hopis there, so they didn’t know that he was often in the kiva.

Joseph said when he attended high school he was not the best student, but he soon learned that he needed to work hard in order to make money.

Joseph told the students and staff that the four keys to success are 1-take responsibility; 2-make a plan; 3-get involved and 4-give back.

In the area of responsibility, Joseph told students to focus on solutions, avoid blaming others, focus on what you can influence and own your problems.

In the area of make a plan, Joseph said to think about what you want to achieve, where you have been and where you are right now.

In the area of getting involved, Joseph said gain experience and find your passion, meet new people and make commitments. He also said find opportunities by choosing opportunities that interest you, find a balance between academics, work and other responsibilities and join groups.

Joseph said students should give back by advocating for people.

“Contribute something larger than yourself,” he said. “Ask how do we do this with a good heart?’