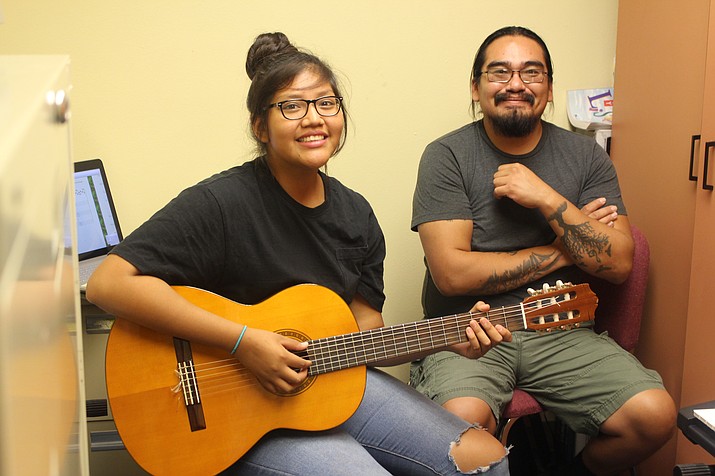 POLACCA, ARIZ. — In the late 1990s, Michael Begay was a student in the Native American Composers Apprenticeship Program (NACAP), which teaches students to compose for string quartets at the Grand Canyon Music Festival.

Now, Begay is one of the teachers in the NACAP and spent the past week at Hopi High School.

“I was working with selected students in the music department at Hopi High composing music for the string quartet for Grand Canyon Music Festival Sept. 2 at the Shrine of the Ages at Grand Canyon Village,” he said.

The professional string quartet, Catalyst from New York, will perform the student pieces.

“They knew the time frame so they were disciplined,” he said. “Their ideas came across nicely to the string quartet”.

Begay said one of the main goals was for each of the students to finish their composing piece.

“I’m happy with the seven students selected by the teacher,” he said. “It was the first time that any of them were composing for a string quartet.”

Begay said in order to be selected, the students had to understand some music theory. He also taught them harmonization arrangement, chord voicing and alternate chord voice, which refers to critical thinking of where to place notes.

He said composing for a string quartet is one of the hardest forms of chamber music.

“Many professional composers are afraid of composing for a string quartet because in the string quartet there is no place to hide. Every note, chord and melodic line must be right. Every detail is under the magnifying glass. It’s challenging to get the right notes and chords,” he said.

Catalyst will give a brief concert for the students at Hopi High around lunchtime Aug. 29 at the high school.

“The Hopi High students will work with Catalyst to work out the kinks,” he said.

Begay said each of the Hopi High music students are unique.

He said Morningstar worked with a cool Japanese theme and Hailey Cardell sang along with her piece and made a piano composition into a string quartet composition. Brown wants to study music after high school.

Begay said he enjoyed working with Hopi High music teacher Thomas Irwin because they would spin-off ideas together.

“Irwin is really fun. I would like to work with him again,” Begay said. “He’s well versed and that comes across to his students.”

Around 1998, when Begay was a sophomore at Greyhills High School in Tuba City, he became involved with NACAP. He moved from Phoenix to Tuba City at that time to attend Greyhills because of their classic guitar program only to find out that it had been eliminated. But Greyhills librarian J.R. Wooden, who often attended the Grand Canyon Music Festival, took Begay under his wing. Wooden introduced Begay to Claire Hoffman, executive director of the Grand Canyon Music Festival, and Mohican composer Brent Michael David.

“I was one of the original five students to compose a piece, and I did another one after I graduated,” he said.

Begay worked at KGHR radio station at Greyhills after he graduated, working on programming and production.

“I created music beds for public service announcements,” he said. “Then I became an assistant with the composers in the NACAP program. I wasn’t paid, but I would drive to all the different schools learning from them. I was relentless working with the composers.”

In 2008 he left Greyhills and started working with the school’s music program either through NACAP or on his own. Three weeks ago, he worked with the South Dakota Symphony Orchestra.

“I have to hunt for opportunities (to make money),” he said.

Begay has obtained jobs as a recording engineer for bands. He also works at a mastering studio in Albuquerque, which is the last process in putting CDs out.

“We do all different types of music. You may like it or dislike it, but you still need to make it sound good,” he said.

Begay, who lives in Tuba City, was impressed with the Hopi High music students.

“A lot of these students have a lot to say within themselves and it comes out through music. Sometimes words cannot express what the music can,” he said. “I can’t wait to come back and see them as composers.”