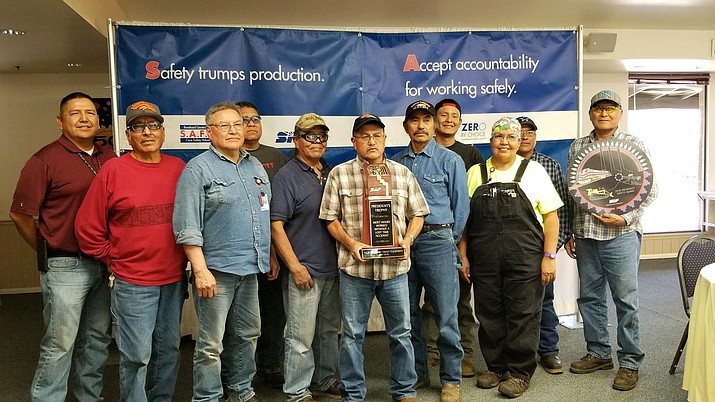 PAGE, Ariz. — After 44 years of hauling millions of tons of coal per year to the Navajo Generating Station, the NGS Railroad & Heavy Equipment Dept. was presented the Salt River Project’s 2018 President’s Trophy for the most hours worked without an accident for the second time.

“I’ve been working out here for 13 years now,” John said. “To win this trophy truly means we are finishing strong. Here at NGS, the Railroad Department puts the most mileage on these vehicles. So not getting into any incident with the vehicles this past year was awesome. It’s great to see our department get this award.”

Rousseau thanked the dozens of department members who attended the PERA Club award luncheon. He said the award has been presented since 1949.

“Thank you to every one of you guys for the mindset that you have,” he told them. “Safety is your number one mindset and I appreciate you guys out there doing what you do.”

Joining them at the luncheon to commemorate the achievement was, Coggins, Senior Director of Power Generation Bill Alkema and Employee Safety Services Manager Nancy Blevins.

“The NGS Railroad and Heavy Equipment group has demonstrated that they are among the elite at SRP for safety performance,” said NGS Plant Manager Joe Frazier. “What an honor it is that our very own NGS Railroad and Heavy Equipment team has earned the FY18 President’s Trophy for their safety performance. This team worked every day during FY18 without a single incident.  Everybody went home the same way they came to work!  That is our goal, ZERO accidents.”

“The NGS Railroad and Heavy Equipment team really exemplifies SRP’s core values in safety, earning the best overall safety performance for a large department throughout all of SRP,” he told the 100 who attended the luncheon. “Each of you deserve to work in a safe environment, supporting your team members. Your efforts are really a model for every member of the SRP family, and you make it clear that doing a job the right way means doing the job the safe way.”

Railroad and Heavy Equipment Manager Harold Watkins said Monday that one key to achieving this distinction was when his crews worked to improve tailboards and communication among themselves.

“As our communication increased, I think people really started paying attention to one another,” he said. “Everyone realized the safety programs are really here to help us. And when they realized that management also felt that, it changed everything.”

He said it is no cliché to say a paradigm shift occurred when everyone began to take safety seriously and they would write down, good or bad, their safety observations.

“It’s a critical component, I really think so,” Watkins said. “Management wants us to be safe, to not rush, to take the time to do it right and to go home safely at the end of the day.”

The SRP Safety Observation Systems presents a snapshot of what’s happening on plant site better than it’s ever done before, he said. It gives visibility to things that need to be repaired or fixed, and to good things that need to be celebrated. Ultimately, it allows managers to allocate resources more effectively to resolve safety issues, Watkins said.

“It’ll be 28 years for me in January, and every crew I’ve worked for in the past hasn’t accomplished this until this year,” he said. “To be on this team and to do it is awesome. It’s something that you only think about doing. But we did it as the railroad.”

Railroad Plant Mechanic Frank Tunney added, “Knowing people will look back and see that we’ve done it, it means a lot being a part of history.”