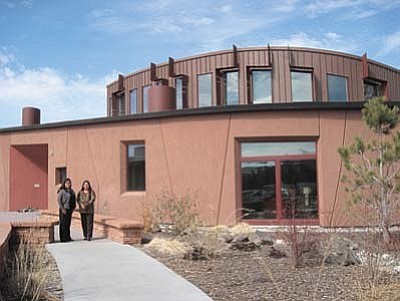 A 2014 photo of the Native American Cultural Center located on the campus of Northern Arizona University in Flagstaff, Arizona. (NHO file photo)

WINDOW ROCK, Ariz. — On Aug. 16, the Naabik’iyátí’ Committee issued a “do pass” recommendation for legislation approving a grant in the amount of $3 million for Northern Arizona University (NAU) to expand its Native American Cultural Center.

The money would come from supplemental funding from the Unreserved, Undesignated Fund Balance

Legislation sponsor Council Delegate Walter Phelps (Cameron, Coalmine Canyon, Leupp, Tolani Lake, Tsidi To ii) explained that if the funding is approved by the Navajo Nation Council and the president, it would allow NAU’s Office of Native American Initiatives to expand the cultural center by 8,500 square feet to improve service delivery and outreach efforts by providing additional office space and classrooms for courses and trainings.

According to the grant application submitted by NAU, the university located in Flagstaff serves over 1,500 Native American, Alaska Native, and Native Hawaiian students — of this amount, approximately 615 are enrolled members of the Navajo Nation.

In a letter addressed the Council, NAU President Rita Hartung Cheng requested support for the funding request to allow the Office of Native American Initiatives to consolidate several Native American programs in one facility, including the Institute for Tribal Environmental Professionals, the Tribal Leaderships Initiatives, and the Diné Institute for Navajo Nation Education.

“Consolidation will also improve coordination of our student academic services with important research and internship opportunities, mentoring and a richly connected community for all Native American students at NAU,” Cheng wrote.

Council Delegate Kee Allen Begay, Jr. (Low Mountain, Many Farms, Nazlini, Tachee/Blue Gap, Tselani/Cottonwood) spoke in support of the funding request, and added that he would also like to see the Nation assist with providing student housing to help more Navajo students who are struggling with the high costs associated with pursuing their academic goals.

He also noted that many parents of students try to help their children with expenses for rent, tuition, supplies and other items, however, many still do not receive enough financial assistance.

According to Phelps, the university is also seeking funds from other Arizona tribes for the project. As of last Thursday, over $1 million had been secured from other funding sources.

Council Delegate Otto Tso (Tó Nanees Dizi) recommended NAU consider requesting the funds from the Nation’s Síhasin Fund if funds are not available from the the Unreserved, Undesignated Fund Balance.

At the conclusion of the discussion, the Naabik’iyátí’ Committee voted 10-2 in support of Legislation No. 0224-18. The Navajo Nation Council will consider the bill next. If approved by the Council, the resolution will be subject to approval by the president.