Rep. Tom O’Halleran sits down with the Navajo-Hopi Observer to talk Native issues 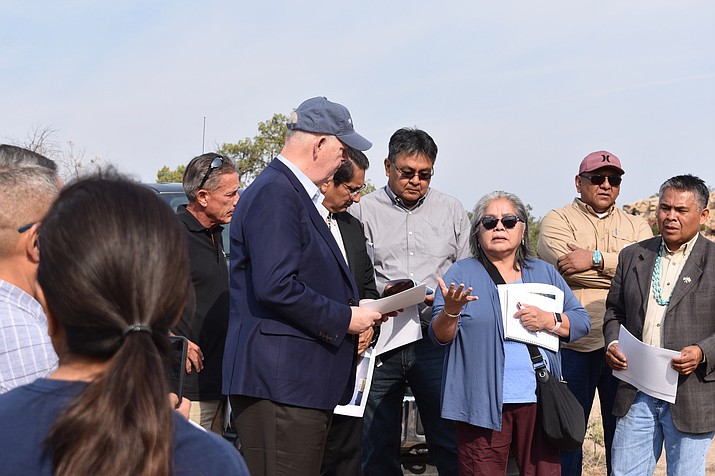 He said jobs, education, health care and veterans issues were the top concerns on the reservation as they are for most rural Arizonians.

O’Halleran is a first-term congressman who is running unopposed in the August Democratic primary election. Three Republicans are battling it out in the primary — Arizona State Sen. Steve Smith, Wendy Rogers and Tiffany Shedd — with the winner taking on O’Halleran in the general election.

O’Halleran represents Congressional District One, which includes the Navajo, Hopi and other tribes. He said the 50 percent unemployment rate on the Navajo Nation is terrible. He is working toward increasing funding for broadband on the Navajo Nation because those computer capabilities could open up jobs.

O’Halleran was able to increase the funding for BIE (Bureau of Indian Education) schools by $100 million. He said five Navajo BIE schools have been approved for new buildings. He could not release the names of the schools yet, but said three are in Arizona and two are located in New Mexico.

Hopi Jr/Sr High School has been lobbying for a new junior high school building for more than 20 years. O’Halleran said he is working with the BIE on this, but he said the BIE is short-staffed. He said funds for the agency have been increased, but some of the leadership roles have not been filled so the money is not being spent as quickly as it should.

O’Halleran recently visited uranium mining sites on the Navajo Nation. He said the problem is only 48 uranium sites are on the priority list out of about 500 uranium sites that need to be cleaned up.

“My goal and objective is to get one million dollars to move up the process,” he said.

O’Halleran said this problem is impacting people every day. He said one woman in Blue Gap lost her husband, five children and a sister.

“You can walk across the road and tailings are there,” he said. “This problem has been going on and some say we need more studies.”

O’Halleran said this would not be tolerated in other communities. For instance, he said the problem with the lead in the water in Flint, Michigan, was taken care when the federal government learned about the problem.

“If this was not on the reservation it would have been taken care of,” he said.

O”Halleran said the EPA (Environmental Protection Agency) is not to blame because they can only clean up what Congress gives them the funding to do.

“Many of these people have no place else to go, and this is disgraceful,” he said. “I can’t understand why they are doing studies when water is contaminated. We need to keep the heat on because people’s lives are at risk. This is nothing to fool around with.”

Regarding Navajo Generating Station (NGS), O’Halleran said he respects tribal sovereignty and his job is to keep the options open for the tribes. He said the federal government is trying to develop economic opportunities for the tribes with renewable energy sources as one option. He said the companies financing NGS can offer similar good paying jobs to the workers, but they may not be on the reservations.

O’Halleran said from day one, he has recognized the need for supporting veterans. He helped approve $21 billion dollars for veterans.

“We passed seven or eight laws that make it easier for veterans to get better healthcare,” he said.

At least $2 billion will go toward building more facilities for the veterans.

“It is so hard for veterans in rural areas to get those services,” he said.

O’Halleran said there were four veterans in Show Low who took a bus to the Phoenix veterans’ center. All of them were sick. They left in the morning and the last person was seen at 11 p.m., then they had to start the bus ride back to Show Low.

“This goes on all the time,” he said.

One of O’Halleran’s priorities has been to see a veteran’s home built in Flagstaff. He said this has been approved with the city of Flagstaff providing the land and the state pitching in $10 million. He said this was approved in March, but no timeline for breaking ground and getting done with the construction has been established yet.

O’Halleran said there is a federal law that no veterans centers can be built on Native American land. He has introduced a bill that would change that law.

“The elderly veterans get sick and we want to send them somewhere where their family cannot get to them. That doesn’t make sense. We are supposed to care for our veterans,” he said.

O’Halleran said the Flagstaff facility will have 60 beds for veterans and it will be open to Native Americans.

O’Halleran said the proposed construction for Low Mountain Road and other roads in rural areas will probably not get funded. He said the Trump administration spoke about funding $1.5 trillion for infrastructure.

“Then we had the tax cut so now there’s no money for that,” he said. “Many programs have been eliminated because of a lack of infrastructure, especially in rural Arizona.”

O’Halleran said he will continue to visit the Navajo and Hopi reservations on a regular basis. He said representatives of the tribes are extremely competent in expressing their concerns to him.

“I want to look at people’s faces so I can relay their concerns to Congress,” he said.