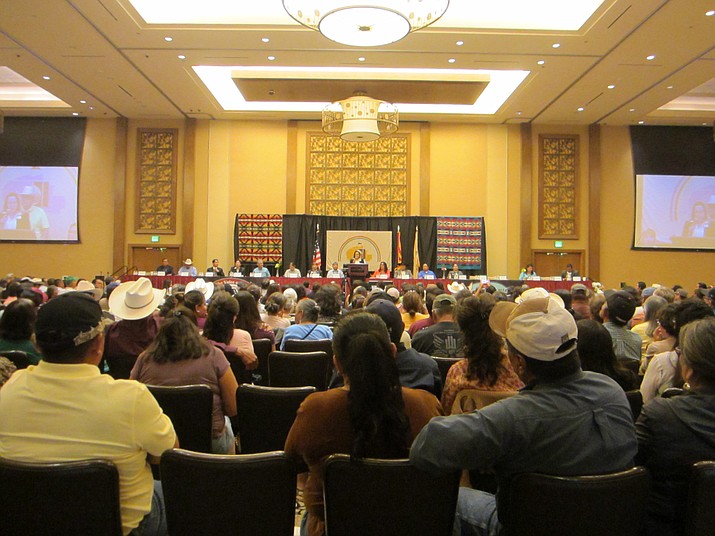 TWIN ARROWS, Ariz. — Fifteen of the 18 Navajo Nation presidential candidates were on hand to answer questions before a packed crowd at one of the presidential forums held July 27 at Twin Arrows Navajo Casino Resort.

The candidates were presented on the panel in the order they will appear on the ballot in the Navajo Nation primary Aug. 28.

Tom Tso, Kevin Cody and Nick X. Taylor were not present. Benny Bahe showed up late for some of the rounds of questions.

With two minutes to respond to questions in each round, the candidates answered three questions each from the panel over the three hour forum.

With the limited time, it was hard to get a real sense of answers from the candidates about how they would solve issues like creating economic development, creating jobs so that young people can come home to the reservation, uniting divisions in the leadership of the Nation, making up the money that will be lost when Navajo Generating Station and Kayenta Mine close and how to provide for those on the Nation who still do not have water and electricity.

Below is a summary of what each candidate had to say:

Navajo Nation President Russell Begaye touted the money his administration is spending on scholarships for the Nation’s students, homes and paying rent for veterans and helping those veterans who are homeless, and provided water and electricity for the Nation’s people.

Tom Chee said it is important to acknowledge and not forget the people who reside on the land in managing the resources of the Nation and that he will put the right people in the right places to get the job done. He spoke about the importance of the Navajo Nation having its own Diné government that does not mirror those surrounding the reservation.

Vice President Jonathan Nez said that young people are having a hard time coming back to the Nation, even though they are told to go get an education and come back home. He said that as the Nation’s president, he will kick that door open to give young people the chance to come back and help build the Nation.

Calvin Lee Jr. said as a lawyer and entrepreneur, within the first 90 days he expects to use data science to go through all the departments/divisions to identify what is going on, where fraud, misuse and waste is and where the money is actually going. He wants to be the education president and establish a Navajo State Department of Education to obtain funding, grants and scholarships for students.

Joe Shirley Jr. said one of his priorities would be business development. But he said the red tape with the Nation’s government is an impediment and small business will develop jobs. He said the families of NGS will have to go off the reservation and that land accessibility is one of the issues he will address.

Vincent H. Yazzie spoke about how the U.S. government oppresses the Nation with land reform. He also spoke about education reform because of low scores and said more money needs to be spent on education.

Rex Lee Jim said if there are healthy strong families,then there will be a healthy strong Nation. He said the Nation needs to make the most of the matriarchal society by combining the Offices of the First Lady with the Offices of the Women’s Commission and all the princesses across the Nation into one office and make sure that office is funded so they can discuss issues. He believes the backbone of the economy is small businesses. He also spoke about education.

Trudie Jackson said the people have asked for someone who is a new person, new voice and new face in tribal politics. She spoke about border town violence, racism and ongoing corruption. She wants to be the person who speaks up about those issues. She said as a leader she will learn to build connections and will bring the voice back to the people.

Alton Joe Shepherd said family is important. He said the big issue facing the Nation in the next four years is the decline of revenue because of the closing of the Navajo Generating Station and Peabody Energy. He said 56 percent of the Navajo people don’t have degrees and the Nation needs to focus on opportunities and jobs for those people.

Emily Ellison said there are many social issues facing the people and government reform is the answer to a lot of those issues. She said the council operates as a business council because of reforms made to Title 2. She said that needs to change. She said one leader is selected by the people and the other by the tribal council and that confuses who is the actual leader of the Nation. Those answers need to be figured out, she said.

Dineh Benally said the Nation needs comprehensive health care and the Nation needs to grow and provide money to its people and children because it has the land and the water. He thinks creating businesses on the Nation that can support larger entities and supply them with sheets, toilet paper and similar items is important.

Down to the wire: Presidential hopefuls Jonathan Nez and Joe Shirley Jr. face off as election closes in
Elizabeth Warren could be a front runner for Native American voters
NAU Forum encourages students to exercise voting privileges
Navajos choose from record number of presidential candidates
Nez and Shirley to face off in Nov. 6 election
Contact Us
Submit Questions, Comments, or Story Ideas