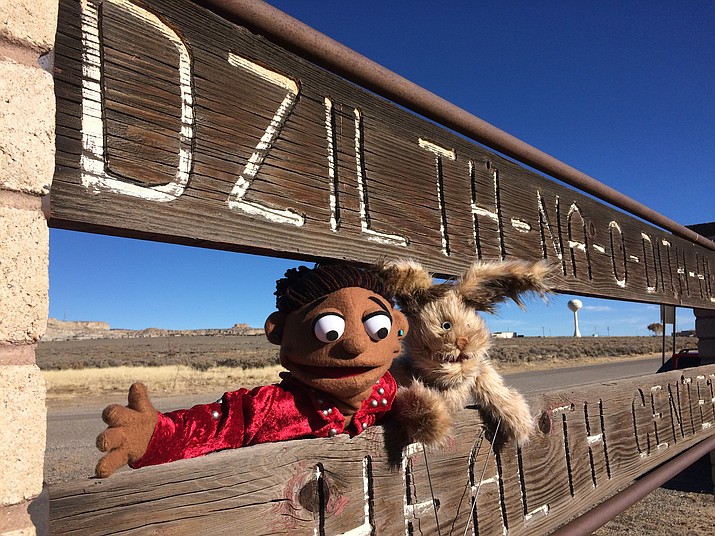 “Diné Bí Ná’álkid Time!” (“Navajo Movie Time”) is a new puppet show that hopes to teach kids to speak Navajo. Ná’álkid Productions will hold talent auditions for children between the ages of 4-18 to be featured in the show in Window Rock Aug. 11 at the Navajo Nation Museum. (Photo courtesy of Naalkid Productions)

WINDOW ROCK, Ariz. — “Diné Bí Ná’álkid Time!” the first educational Navajo and English puppet show to teach the Navajo language and culture through digital media, is hosting talent auditions for Navajo and English speaking children and teens between the ages of 4-18 in Window Rock, Arizona.

Auditions will be held for the following talent: child actors/actresses (ages 4-11 and teens up to 18 years old) Navajo/English speakers; puppeteers; modern/traditional singers and dancers; drum groups and dance groups. All children must be accompanied by an adult.

If you hold a title from a Navajo/Native American pageant or were a contestant, you may sign up to audition Aug. 10 from 2:30 to 5:30 p.m. at the Navajo Nation Museum. Please email your name, age, name of title, what talent you will present at the audition to: naalkidproducer@gmail.com.

Dr. Shawna Begay and Charmaine Jackson teamed up to produce the show, which is geared toward pre-school students ages 4 to 6-years-old to teach them the Navajo language and culture for the purposes of saving, rejuvenating and revitalizing the language through educational media.

Begay said one of the inspirations for the project was her own background. She never learned Navajo when she was younger and it was not until she was older that she realized how valuable the language is to the livelihood of the Navajo Nation.

The stereotypical images of Native Americans on screen also influenced what people thought of her — that she lived in a teepee or wore a headdress. It was those experiences that influenced Begay’s decision to get involved in film work and eventually why she decided she wanted to leverage educational media for language revitalization.

“Language develops at birth and as a child I wish I would have been taught the Navajo language,” Begay said. “I remembered watching “Sesame Street” at that young age and learned my English letters and numbers. It occurred to me, what if I had access to a Navajo “Sesame Street” or a show that was in the Navajo language — would I have been more inspired and motivated to learn the language when I had access to it with my grandparents?”

Begay said she thought about just approaching PBS and “Sesame Street” and asking to dub the shows into Navajo, but discarded that idea because she felt it was too easy.

“I realized I needed to decolonize “Sesame Street,” Begay said. “Don’t get me wrong, I am not saying that “Sesame Street” is bad, but it perpetuates western thinking and learning objectives. As Navajo people, we have our own learning objectives and Navajo way of knowing, which are completely different from Euro-western schooling. And so, I had to develop our own curriculum guide that is meant to teach Navajo through media.”

Begay said using technology to teach kids is an easy jump today, when kids are on cell phones, tablets and watching television and it is an easy medium to use to reach children.

“There are many studies out there that show television teaches many different concepts,” Begay said. “I see Navajo children walking around the reservation counting in Spanish because they watch “Dora the Explorer.” So, why can’t we have a Navajo show that teaches Navajo language, numbers and concepts?”

Begay said media will never take the place of teachers or teaching, but media can be a tool to inspire, to get the dialogue going and to have a time where parents and children can learn together.

More information can be found at https://www.gofundme.com/dine-bi-naalkid-time, on Facebook at Diné Bí Ná’álkid Time  or by email: naalkidproducer@gmail.com.