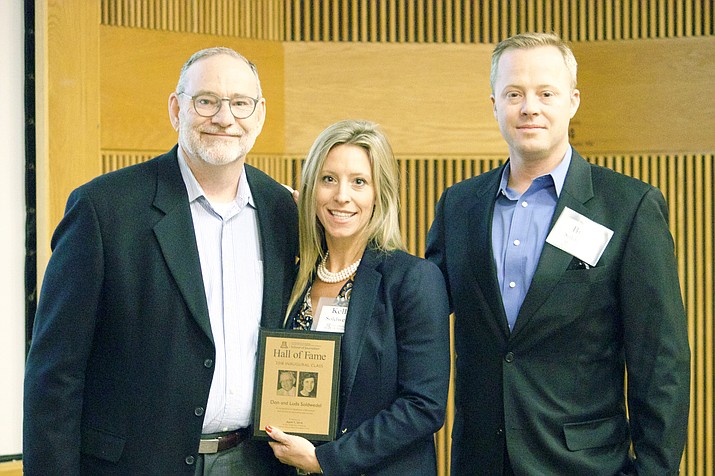 John D'Anna, left, University of Arizona Class of '83, presents a plaque honoring Don and Luda Soldwedel to their grandchildren, Kelly and Brett Soldwedel. Don and Luda were inducted into the inaugural class of the UofA School of Journalism Hall of Fame April 7. (UofA/Courtesy)

Their devotion to the Fourth Estate proved a lasting legacy for their children and grandchildren.

Their love and commitment to community newspapers in Arizona was honored April 7, at the University of Arizona in Tucson where the loyal Wildcats were an ever-present force at the journalism school, not only with their philanthropy but with their presence and encouragement.

The Soldwedels are counted among 14 individuals and two couples inducted into the inaugural University of Arizona School of Journalism Hall of Fame. Among the honored are Pulitzer Prize winners, trailblazing faculty and lifelong champions of journalism such as the Soldwedels.

“Don and Luda set an example for all of us about the power of thoughtful giving,” Sharkey said of the journalism school benefactors who over the years were generous contributors to an endowment intended to benefit the school in perpetuity.

The Soldwedel family —son, Joe, the president and chief executive officer of Western News&Info Inc., parent company of The Daily Courier, a 1974 University of Arizona graduate; daughter, Ann; grandson, Brett, associate vice president; and granddaughter, Kelly, associate vice president and 2003 University of Arizona graduate — is delighted to have their parents and grandparents so honored.

Joe Soldwedel said his father gave “tirelessly” to the journalism program because of his belief in the importance of educating future generations of journalists. Don, who died at age 83 in February 2008, was instrumental in helping retain the journalism school that in 1994 was in jeopardy of closing down. Don founded the Journalism Advisory Council two years later, and was a key player in the building of new facilities that boasted computer labs.

Don’s journalism career started in 1953 when he accepted an offer from Luda’s father, FF McNaughton, to oversee his half portion of the Yuma Sun newspaper operation. At the time, Don was running the University of Arizona student union. Don and Luda met in Pekin in the summer of 1940 — Don was just 15 and working on his own family’s dairy farm.

From the start of his newspaper career, Don was devoted to journalism; over the course of his two-decade career he hired numerous University of Arizona graduates.

Five years after joining the Yuma newspaper operation, the McNaughton-Soldwedels purchased The Daily Courier. From 1958 until 1978, when Western News&Info became the legal parent company, each of the newspapers operated independently. WNI’s initial foray outside traditional print media was Sun Television in Yuma in 1981 and then Del Outdoor in 1987.

“While Don and Luda were generous financial contributors to the school, writing checks wasn’t sufficient enough for Don, which resulted in his regular j-school presence,” his son said. “Don and Luda both graduated from the University of Arizona — he earned a business degree and she a Spanish degree in 1946 — and held a steadfast and deep love for, and dedication to, the university and Tucson their entire lives.”

“Brett and I feel very fortunate to be the fourth generation of the Soldwedel family doing community newspapering in this great state of Arizona, and being able to continue the tradition of putting out quality journalism. And that’s thanks to incredible j-schools like this one here at the University of Arizona,” Kelly Soldwedel said at the induction ceremony. “So thank you and ‘Bear Down.’”