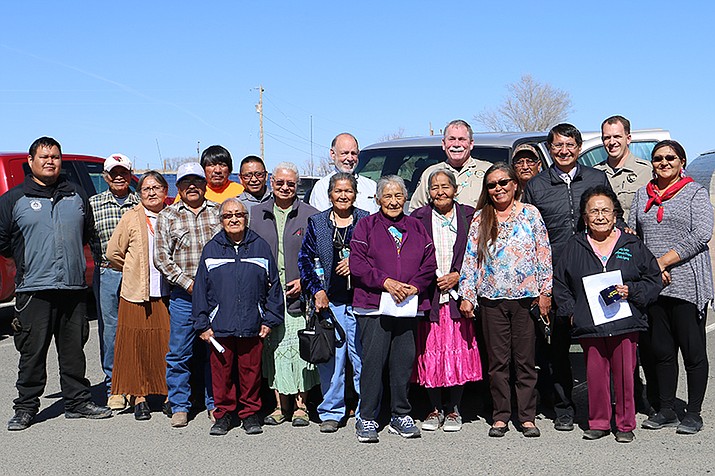 Navajo Nation Vice President Jonathan Nez, Navajo County Sheriff KC Clark and members of the Piñon Chapter gather in front of a truck donated to the chapter’s Community Emergency Response Team April 9. (Office of the President and Vice President of the Navajo Nation)

The extended-cab truck, which the Sheriff’s Office formerly used for criminal investigations, also came with a camper shell. It is the ideal vehicle for injured or critically ill patients who live on the network of dirt roads in this remote location.

“What we’ve learned over the years is that the ambulance won’t go off the highway,” Chapter President Bessie Allen said during a chapter meeting April 9, during which Sheriff KC Clark officially turned the truck keys over to the chapter. “Our response team needs its own vehicle to meet the ambulance at the place where the pavement ends.”

The chapter’s CERT is a volunteer-based team tasked with serving the community in times of emergency. Previously, volunteers used their own vehicles to transport patients.

“This vehicle is essential to enable CERT members to serve the people in the community,” Navajo Nation Vice President Jonathan Nez said. He attended the chapter meeting to announce the donation and facilitate the transfer of the vehicle to the chapter.

“Infrastructure is important on the Navajo Nation,” Nez said. “While we are focusing construction and maintenance of roads, we also need to prioritize emergency response and make sure communities’ needs are being met.”

Clark commended Piñon Chapter for its continued partnership with the county. The Sheriff’s Office works closely with the chapter’s CERT to address the needs of residents.

“The priority for all public safety is to be available to residents in time of crisis and immediate need,” he said. “This vehicle will help the Piñon community transport residents to locations where county services can take over.”

In his address to the chapter, Nez also announced a $247,000 contract with CB Emulsion he signed last week. The contract dollars will cover additional equipment to haul red dog gravel from Peabody Western Coal Company to 10 chapters — including Piñon — in the Black Mesa area.

Since 2011, more than 100 miles of road in Black Mesa have been covered with this gravel, which offers a solution for worn and dangerous roads that is less expensive than paving. A partnership known as the Piñon Project, launched in 2009 to process and transport the gravel to Black Mesa, includes the Bureau of Indian Affairs-Navajo Region, Navajo County and local school districts.

“We welcome partnerships with the counties,” he said. “Working together to come up with solutions will benefit all of us.”