Winslow baseball team improves to 13-8 after losses at tourney 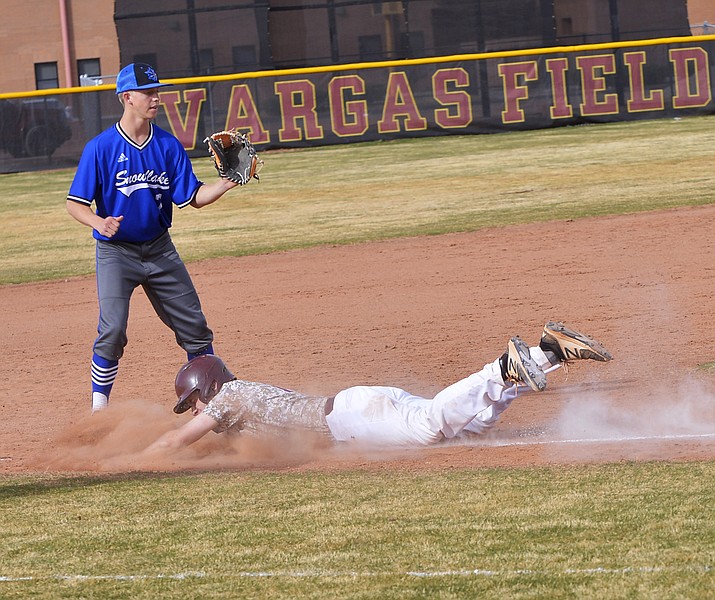 Brennan Sawyer is safe at second base in the Bulldogs' win against Snowflake April 10. (Todd Roth/NHO)

The wins improved Winslow’s record to 13-8 for the season. No statistics were available for the Page game.

In the win over Snowflake, the Bulldogs came from behind after the Lobos scored a run in the first inning and another in the second, with a five-run bottom of the second.

The Bulldogs increased their lead to 7-2 in the fourth inning and 8-2 in the bottom of the sixth.

The Lobos scored their last run in the top of the seventh as the game ended.

Junior Villanueva got the win, giving up three runs, only two of which were earned, on 10 hits. The Bulldogs had 12 hits led by Brennan Sawyer, who went three-for-four. A.J. Huerta and Daniel Vizcaya were two-for-four, with Vizcaya having a double.

The Bulldogs went into the Wolves Classic Tournament at Goodyear with a 10-7 record.

In games in late March and early April they lost a close game to the Show Low Cougars 5-4 at Show Low March 19. On March 22, they defeated the Snowflake Lobos 17-12 at Snowflake. The Bulldogs defeated the Monument Valley Mustangs 10-0 at Kayenta March 23.

The winning streak continued March 26 with a 5-0 win over the Blue Ridge Yellowjackets at Winslow.

Back on the road, the Bulldogs ran into a losing streak with a 6-4 loss to the Payson Longhorns at Payson. The Holbrook Roadrunners defeated the Bulldogs in an eight-inning game 7-5 at Winslow April 3.

The Wolves Classic Tournament began with losses to the Payson Longhorns 24-18 in a wild slugfest and a 9-5 loss to the host Estrella Foothills Wolves April 6. On April 7, the Bulldogs got back to winning with a 16-10 win over the Combs Coyotes to complete their tournament schedule.

The Bulldogs defeated the Holbrook Roadrunners 10-4 at Holbrook in their first action after the tournament.

The last game of the regular season takes place April 23 against Show Low in Winslow.