Letter to the editor: It is time for clean, safe renewable energy 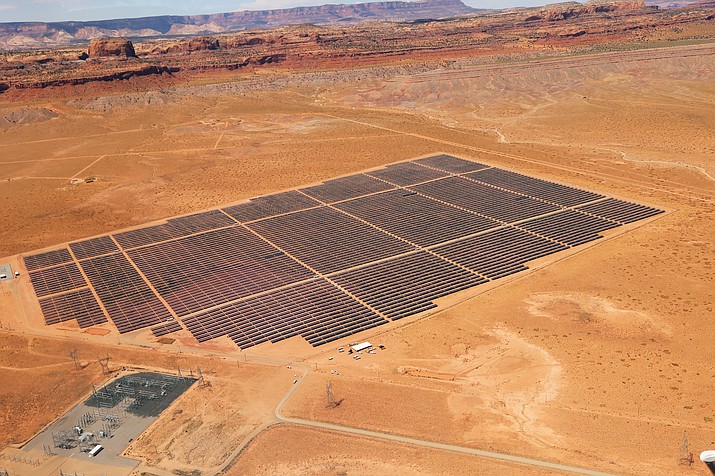 The Kayenta Solar Facility is located on 300-acres of land, some of which was grazing land given by local Navajo families to develop the solar farm. Submitted photo

I am concerned about the conflicting and misleading information Navajo Nation Speaker LoRenzo Bates, Nathaniel Brown and other Navajo Nation officials have made, as well as legislation they are pushing through council relating to the Navajo Generating Station’s 2019 closure. While federal, state and utility owners, like Salt River Project have made public statements that they are closing NGS at the end of 2019, due to the unprofitable coal generation of NGS, Navajo Nation officials like Lorenzo Bates have been giving Peabody miners false hope.

Mr. Bates and Peabody Coal Company are wasting precious time, spending resources on looking for new owners. These efforts only benefit Peabody Coal Company, not Navajo workers. Given that Peabody is entirely reliant on coal, of course, they are trying to keep Kayenta Mine and NGS going.

We need to make sure Peabody and Navajo Generating Station (NGS) owners are assisting workers to develop their skill capacity by creating education opportunities so they can pursue other employment outside of the coal industry and ensure their health insurances package are in place before the closure.

NGS is closing because the market price of coal has become too high. The fact that no company has stepped forward to buy NGS to this day speaks to how untenable the “Yes to NGS” campaign led by Peabody is. Not to mention, if a buyer were to step forward at this date, it would most likely be years before NGS could resume, because the Environmental Impact Statement (EIS) for Kayenta Mine and NGS has been placed on indefinite suspension, since the day the owners decided to shutdown NGS. Any new owner would be legally obligated to complete the expensive EIS.


This is all about economics. If Salt River Project (SRP) found a cheaper way to keep NGS open they would have done so. We should know because we (Navajo and Hopi) have given them the cheapest price for electricity and water for all these years.

There is a better way — we can transition to renewable energy sources. We need our Navajo Nation leadership to support these initiatives! Peabody’s lies are doing more harm than good, and they are stifling our optimism for the future.

We need more initiatives like the Kayenta Solar Farm. It is a 27.3 megawatt facility that will be serving the community of Kayenta. The Kayenta solar facility employed 278 people at the peak of construction, Navajos comprised, 80 to 85 percent of the workforce, over the 10 months construction of the power plant, security structures and sub-station with a $10 million in combined payroll. The multiplier-effect provided $15 million to the community as a result of construction of the solar facility. In addition, there was over 4,700 hours of formal training in technical, general and safety training over a 10-month period. Due to the success of the Kayenta solar facility there is currently another 27.7 megawatts solar facility on the drawing board.