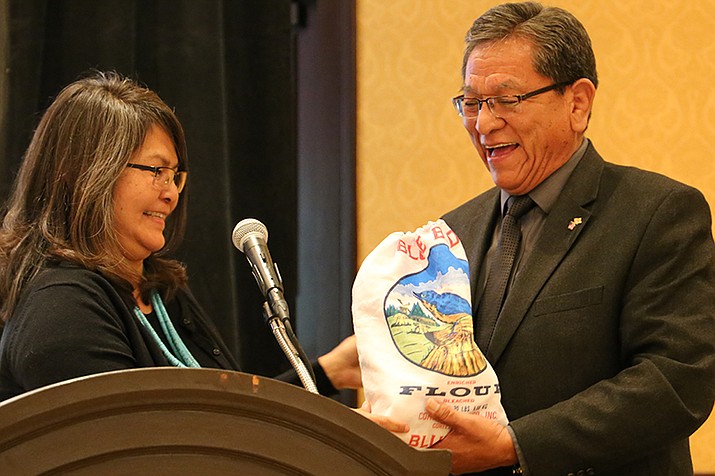 Jennifer Wheeler, education specialist for the BIE Navajo District, presents a bag of Blue Bird flour to President Russell Begaye after his speech April 6 at the Diné Language Symposium. (Navajo Nation Office of the President)

The president opened the two-day symposium with a speech designed to rally educators in support of bilingual or immersive Navajo education in the gamut of schools serving Navajo youth. Participants represented BIE, tribally controlled, grant and public schools, as well as colleges and universities.

They traveled from across the Southwest to attend the symposium, held at the Crowne Plaza Hotel in Albuquerque.

The key to successful schools and students who can compete on the global level is a return to Navajo as a first language, Begaye said. By embracing Diné Bizaad at home, the next generation of Navajo students will be uniquely poised to become technology and industry leaders and tackle some of the world’s biggest challenges.

Begaye encouraged educators to work to reverse trends that gained momentum generations ago with boarding schools and federal assimilation policies. Not too long ago, Navajo students were punished or ridiculed for speaking their language at school.

Even parents believed that teaching their children to speak Navajo would impede their progress or limit their opportunities, Begaye said. He urged educators to plant the seeds of an effort that would revive the language by speaking it in the home.

“English should be our second language,” he said. “We need to change the existing mindset and teach our children Navajo at home and English—the trade language, the business language—at school. If we’re really serious about reviving our language, about making it the true, official language of the Navajo Nation, then we need to get excited about teaching it. It needs to start with mom and dad, grandma and grandpa, and it needs to start at birth.”

Vice President Jonathan Nez also has been an advocate for a revitalization of Diné Bizaad. The call to teach the language in the home comes as the Navajo Nation prepares to commemorate the 150th anniversary of the signing of the Treaty of 1868.

"Our ancestors signed the treaty to ensure that Navajo is a sovereign nation," he said. "Part of that promise is the ability to decide for ourselves who we are. Our language is an integral part of our identity as a sovereign people."