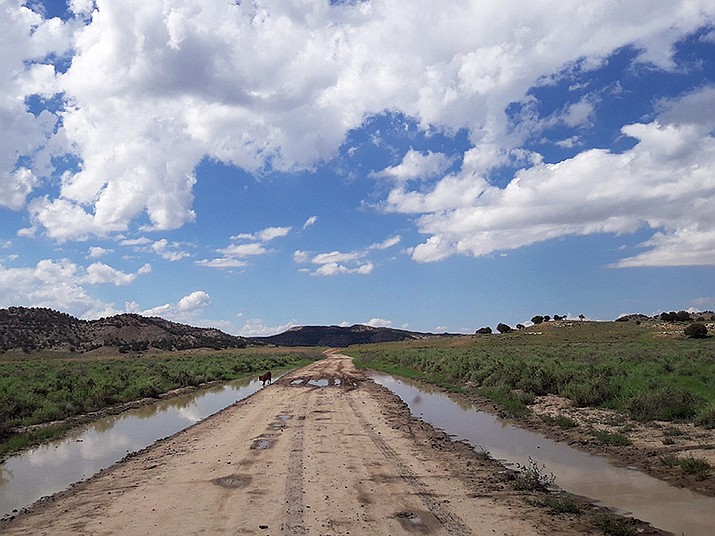 The contract dollars come on top of a $500,000 yearly commitment from the Navajo Division of Transportation (NDOT). The contract, which outlines an agreement between NDOT and CB Emulsion, calls for the rental of four semi-trucks and four belly dump trucks to haul 4,500 loads of aggregate materials — or Red Dog gravel — from Peabody Western Coal Company to the Black Mesa region.

Known as the Piñon Project, the partnership was formed in 2009 and also includes the Bureau of Indian Affairs-Navajo Region, Navajo County and local school districts.

“Most of the roads in the Black Mesa region are unpaved,” Nez said. “This partnership allows us to crush the hard rock at Peabody and haul it for use on the roads. This contract puts another quarter of a million dollars into these roads.”

In past years, rain or snow has rendered the dirt roads impassable, said Jesse Thompson, chairman of the Navajo County, Arizona, Board of Supervisors. Acting on reports of school buses and emergency vehicles getting stuck in the mud, Navajo County joined the partnership to seek solutions. The county assists with bidding out the contract, providing drivers and water trucks and funding staff to work in the region.

“Dirt roads become impassable in inclement weather,” Thompson said. “Navajo County appreciates the Navajo Nation’s continued support of the Red Dog Project. Upgrades will result in graveled, all-weather roads. This means tremendous improvements to the quality of life for students, seniors and the entire community who will have access to reliable transportation.”

Since then, the partnership has worked to crush 50,000 cubic yards of red dog gravel per year and distributed it on roads within the 10 chapters. Since 2011, more than 100 miles of road have been covered, or two miles per chapter per year.

“The complete involvement of the 10 chapters within this program is commendable,” NDOT Director Garret Silversmith said. “This year, the additional funds will help increase the efficiency and overall success of the program.”

The initial partnership called for each chapter to contribute $10,000 per year to cover the cost of crushing the material. Navajo County assisted by seeking bids for crushing, prioritizing road segments and providing water trucks and drivers.

As of 2017, the Navajo Division of Transportation (NDOT) has overseen the project and transportation of material to each chapter. Additionally, the cost per chapter has gone up to $15,000.

In 2018, material has only been hauled to one of the 10 chapters. By signing the $247,000 contract, Nez is ensuring that more chapters get the road assistance they need.

“It is encouraging to see that this project is still going,” Nez said. “The cost to haul gravel from locations off the reservation is two or three times the cost of the material itself. Using local materials, like Red Dog Gravel, allows us to use the available funding in a more effective manner and improve more miles of roads.”

According to NDOT data, paving one mile of road costs as much as $2.3 million. Using gravel comes in at a fraction of the cost, at about $150,000 per mile.