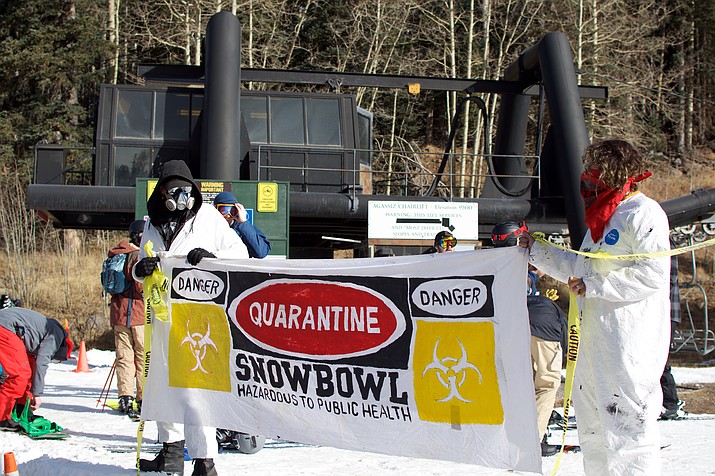 In November, protestors blocked a portion of the ski run at Arizona Snowbowl in Flagstaff as the skie area prepared to open with only man-made snow. Protestors later moved when law enforcement threatened action. (Photo/Dustin Wero)

PHOENIX — Attorneys for Snowbowl are warning the Arizona Supreme Court that if they don’t overturn a ruling allowing the Hopi Tribe to sue over artificial snow they are opening the door to a flood of litigation.

In legal filings with the state’s high court, the lawyers contend the Court of Appeals effectively created a new law — one they claim has no precedent — by permitting the tribe to claim it is suffering a “special harm’’ from allowing the use of treated effluent on the site owned by the U.S. Forest Service. That February ruling, unless overturned, gives the tribe a chance to make their case to a jury.

But John Egbert, the lead attorney for the resort, wants the justices to preclude that option, clearing what could be the last of a series of legal hurdles for snowmaking.

The tribe has tried to block both expansion of the resort and the artificial snow for years, making various arguments on how the use of treated effluent would violate their religious freedom because it would impair their ability to pray and conduct ceremonies on the San Francisco Peaks outside of Flagstaff. There also were environmental claims.

All have been rejected by federal courts.

What that left the tribe is a bid to claim the artificial snow is a “public nuisance.’’

A trial judge threw out that case, saying only those who have suffered an injury different than that of the general public have a right to sue.

But Judge Kenton Jones, writing for the Court of Appeals, said that is precisely what the tribe is claiming.

For example, he said, one allegations is that the artificial snow will end up in springs and water bodies the Hopi tribe use for ceremonial and utilitarian purposes.

There also is a claim that the treated effluent will affect the purity of ceremonial objects collected by tribal members during pilgrimages. Tribal attorneys said these objects “cannot be used for ceremonial purposes if they become tainted or impure.’’

All that, Jones said, creates a “special injury different in kind ... from that of the public.’’ And he said that is enough to take the case to trial.

Egbert said that ruling, if allowed to stand, could open the floodgates for all sorts of individuals and organizations to file their own public nuisance lawsuits.

“Just as the Hopi Tribe claims the San Francisco Peaks as having a special importance to its members, other tribes make similar claims, and, for a variety of reasons, so do environmentalists, outdoor enthusiasts and others,’’ he wrote.

Egbert said that is why nuisance claims have been limited to situations where the general public is being harmed, versus the appellate court’s conclusion that a special harm to any group entitles it to seek legal relief.

“That new category potentially applies to a broad spectrum of individuals who may consider a place to have special importance, and whose interests in the place will often be inconsistent and incompatible,’’ the attorney wrote. “It is simply not possible to fully accommodate all of these competing interests.’’

And Egbert said that is why balancing of various competing interests “is more appropriately handled through the procedures of the legislative and executive branches’’ versus the courts “which is, by design, the least representative branch.’’

In fact, he argued, that already has happened, saying public authorities already considered and approved the use of artificial snow for skiing on the government’s own land.

“The U.S. Forest Service already considered the public rights at issue and weighed and balanced all the competing interests of the disparate stakeholders, including the Hopi Tribe and others who view the Peaks as having special importance,” Egbert said. The final result, he said, was government approval to use artificial snow “on a small portion of the government’s land for the public benefit.’’

It isn’t just Snowbowl that wants the appellate court decision reversed. So does Flagstaff, which has the contract with the company to sell its treated effluent.

In his own legal filings with the Supreme Court, John Klecan, representing the city, said any injury’’caused by the use of treated effluent on the mountain is not unique to the tribe and its members but is “common to all of the public who frequent or utilize the area for many different purposes.’’ And that, he said, makes it improper to allow the tribe to claim has a special interest allowing it to pursue a nuisance claim.

“While members of the public may have different reasons for wanting to use or visit public land, their motivation or reasons do not change the fact that the common injury to all is environmental damage,’’ Klecan wrote.

The justices have not yet set a date to consider whether they even want to review the appellate court decision, much less overturn it.