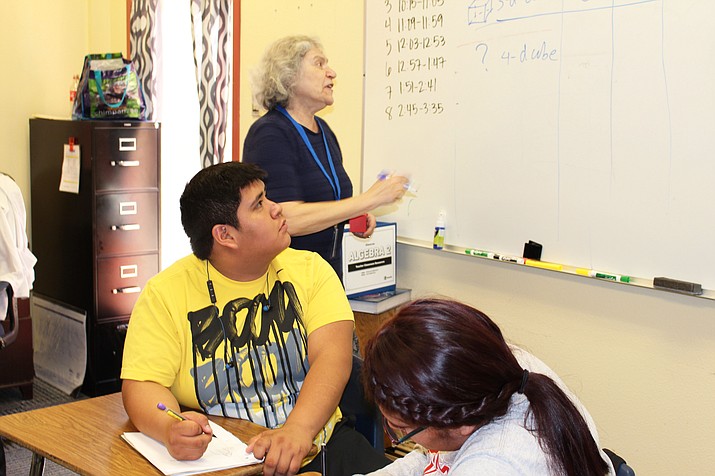 Shubin told the Hopi High students that math is about patterns. She said noticing patterns is important.

“This is only the first step, then you can explain why the pattern occurs,” she said.

Shubin is a co-founder of the Navajo Nation Math Circles project which is aimed at launching and supporting math circles for teachers and students on the Navajo Nation. This project started in 2012 and has expanded to other Native American communities.

AIMC is an educational program connecting professional mathematicians from around the world with indigenous students and their teachers. This effort grew out of a five year effort with Navajo Nation math circles and seeks to expand its impact by helping indigenous communities to discover the fun and beauty of math.

Shubin, who is from San Jose State University, is one of four directors in the program. The others are Henry Fowler from Dine College, Bob Klein from Ohio University and Amanda Serenevy from Riverbend Math Circles.

AIMC has organized more than 100 math visits to indigenous schools during the last five years. AIMC leads math sessions for students and teachers.

Shubin was born and raised in Russia. As an eighth grader she attended a specialized physics and math boarding school in Siberia. This experience prompted her to co-found San Jose Math Circle and the Bay Area Math Adventures in 1998. She has since become one of the leaders of the National Math Circles Movement.

Shubin now serves as co-founder and co-director of AIMC.

Shubin joined the faculty of San Jose State University in 1985 after earning her doctorate in math from the University of California at Santa Barbara. In 2006, Shubin won the Northern California, Nevada and Hawaii section of the Mathematical Association of America Award for Distinguished College of the University Teaching of Math.

In 2017, Shubin earned the Mary Dolciani Award, which recognized a pure or applied mathematician who is making a contribution to the education of students in America or Canada.

More information is available at aimathcircles@gmail.com.

This article was produced through literature provided by AIMC