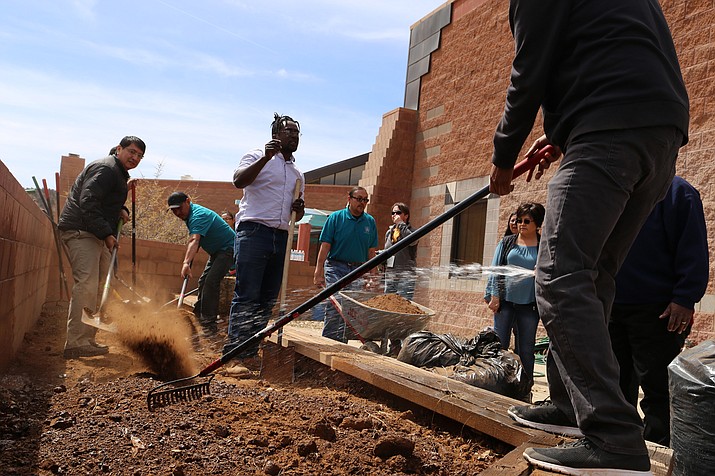 On the third day of the Diné Bich’iiya’ Summit held at Diné College participants help build a garden at the Navajo Nation Museum. (Navajo Nation Office of the President)

TSAILE, Ariz. — The sprouts of a Diné Food Policy emerged out of the Diné Bich’iiya’ Summit held at Diné College March 29-30 and at the Navajo Nation Museum March 31.

An initial draft of the food policy was presented during the second day of the summit. Rather than focusing on production alone, the policy emphasizes self-sufficiency, health and culture.

“At this stage in society we don’t have a say in what kind of food comes onto the Navajo Nation,” said Dr. Franklin Sage, director of the Diné Policy Institute. “With a food policy, we will have a say. We need access to healthy food. We need to take back ownership over what we eat.”

Because there are so many components to food policy, the Diné Bich’iiya’ Summit was helpful to bring together like-minded individuals with varying degrees of knowledge and a diversity of expertise. Thus far, in addition to a draft policy, there are recommendations for the future United States Farm Bill, reports and food-related policies from other entities that need to be taken into consideration.

“This is a new beginning for food policy on Navajo,” Navajo Nation President Russell Begaye said. “There has been deliberation over the years that eventually went stagnant, but with the food summit we are bringing it back to prominence with the help of many people and organizations.”

At the summit, there were presentations on Good Agricultural Practices (GAP), traditional food practices, the farm to school effort and misconceptions of food policies. There was also a 5K run on the first day and attendees broke out into sessions in the afternoons for the first two days for food demonstrations, fitness gardening, the community food system and more. On the last day of the summit, there was a hands-on gardening activity by Diné College Land Grant Office, Tolaní Lake Enterprise and Little Colorado River Watershed Chapters Association at the Navajo Nation Museum in

Window Rock. The session was the first of a five-part series on gardening that will take place over the course of the summer. In all, over 300 people attended the food summit.

“With this year’s summit, we are coming back together to share knowledge and expertise,” Nez said. “We see farms popping back up around the nation and people more interested in farming. With that momentum, we are now focusing on how food is produced, processed, distributed and purchased with a food policy that we hope to complete by the end of the year.”

The Office of the President and Vice President would like to thank Diné College, Navajo Department of Health, and all of our non-profits and participants for your contributions and encouraging presence.