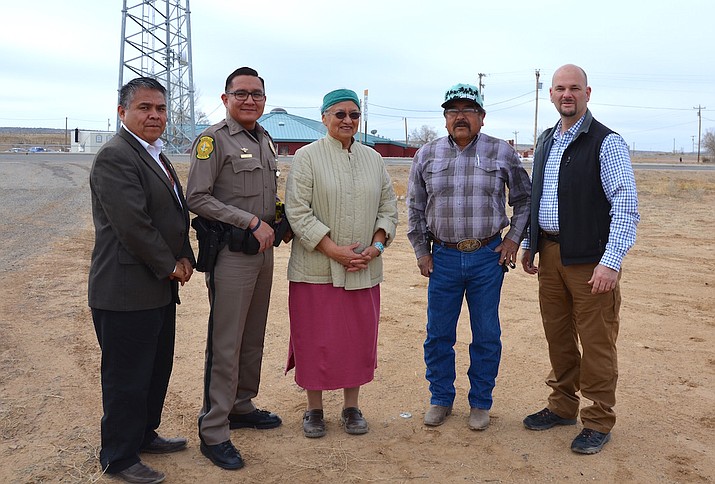 The Bureau of Indian Affairs Office of Justice Services Deputy Bureau Director Charles Addington was on hand to discuss the funding and also to tour the proposed sites for a police substation in Blue Gap, Arizona and the Navajo Nation Police Academy in Chinle, Arizona.

The proposed Dził Yijiin Judicial District facility would be located near the community’s shopping center and consist of a district court, police substation, and fire and rescue services.

During the site visit, Begay (Low Mountain, Many Farms, Nazlini, Tachee/Blue Gap, Tselani/Cottonwood) emphasized the tremendous need for judicial and public safety services and resources for rural communities, such as Pinon, which is located approximately 45-miles west of Chinle.

“The community of Pinon is one of the most rural communities in the Navajo Nation, Begay said. “Navajo citizens have to travel far to receive public safety and judicial services. The community and myself seek the Office of Justice Services’ assistance and guidance to secure funding to construct the facility, which would assist many people, families, and surrounding communities.”

According to Pinon Chapter president Bessie Allen, the Dził Yijiin Judicial District is currently housed in the chapter house. The chapter has withdrawn land for a modular building, which was purchased to temporarily house the judicial district staff.

In March 2017, the Law and Order Committee approved Legislation No. 0099-17, a modification for supplemental funds in the amount of $340,000 within the Judicial Branch’s budget to purchase a modular building for the Dził Yijiin Judicial District.

Begay said the purchase of the modular building serves as a temporary facility until the proposed judicial building is constructed. He added that sustainable judicial and public safety facilities are needed to deliver quality services and resources.

Following the visit in Pinon, Begay also showed Addington the proposed site of the Blue Gap police substation at the junction of Navajo Route 4 and 29, which is a community driven project. The Blue Gap Chapter implemented the building and infrastructure planning, however, the operation costs for the substation requires funding, Begay added.

Addington thanked Begay for providing an in-depth tour and discussion of the judicial and public safety needs within the Dził Yijiin region and stated that he would consider and recommend federal funding and create successful partnerships for the proposed projects.

Information provided by the Navajo Nation Council Office of the Speaker