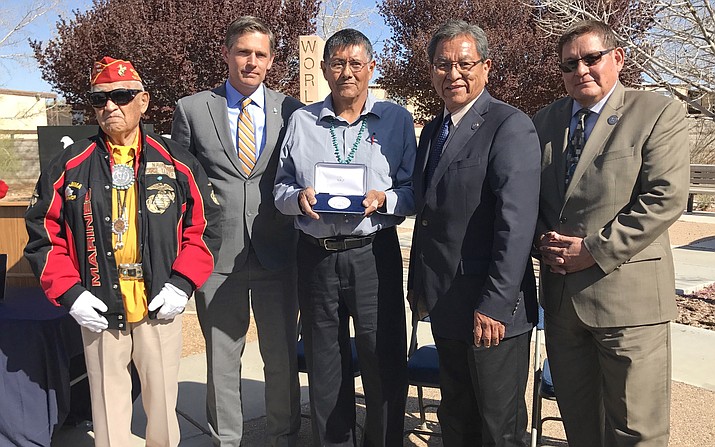 ALBUQUERQUE — The family of Navajo Code Talker Adolph Nagurski were presented with a Congressional Silver Medal in recognition of his service during World War II at the New Mexico Veterans Memorial in Albuquerque, New Mexico April 3.

In 2000, Congressional Silver Medals were authorized by Congress and produced by the U.S. Mint to recognize the dedication and service of the Navajo Code Talkers, who served in every Marine battle in the Pacific from 1942 to 1945. The Congressional Silver Medals were first presented to Navajo Code Talkers in 2001, however, Nagurski did not receive a medal at that time.

During the ceremony, Bates extended his appreciation to the Nagurski family and said that all Navajo Code Talkers deserve great recognition for their service, strength and sacrifice to defend the country and the Navajo Nation.

“Today is a remarkable day to recognize another great Navajo warrior, Adolph Nagurski, and his family,” Bates said. “Our Navajo Code Talkers deserve salute for their bravery and courage to defend and protect our country with our Diné language. On behalf of the 23rdNavajo Nation Council, we congratulate the Nagurski family as we honor and recognize their father and grandfather’s bravery and service.”

Heinrich said presenting the Congressional Silver Medal would finally honor and show appreciation to the family of Nagurski.

“When I realized in October that Adolph Nagurski never received his silver medal, I immediately began the process of securing the medal that he and his family deserved,” Heinrich said. “There were many obstacles, however, the determination to recognize and honor Adolph Nagurski and his family was more important. The Navajo Code Talkers and their families deserve great recognition for winning World War II.”

Upon receiving the Congressional Silver Medal, Benjamin Nagurski commended Heinrich and shared memories of his father.

His son said Adolph was Kinyaa’áanii, Towering House Clan, and born for Naakai Dine’é, Mexican Clan. He was originally from Sand Springs, Arizona, but was relocated near Indian Wells. He has three children — Evelyn Nagurski, the late Wayfa Walker, and myself. He has many grandchildren and great children.

“We remember him as an extraordinary man who did anything to protect his family, people and the Navajo tradition,” Benjamin said.

According to his son, Adolph Nagurski joined the Marine Corps at the age of 17 and returned to the Navajo Nation following his service.

“We will always remember and honor all Navajo Code Talkers and Navajo veterans. On behalf of the 23rdNavajo Nation, we will continue to pray for them and their families,” Bates said.