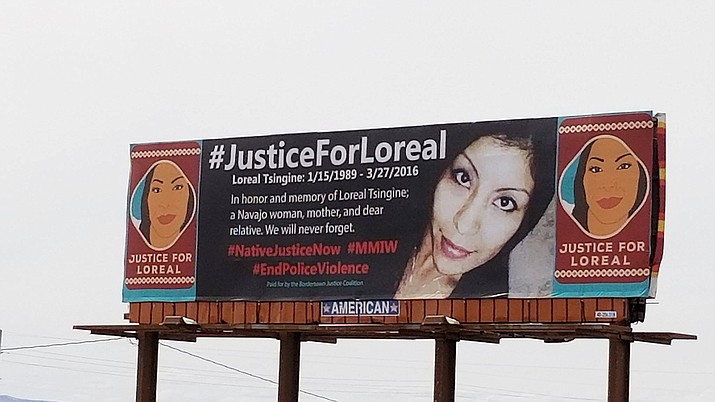 On March 24, Bordertown Justice Coalition unveiled a memorial billboard to commemorate the second anniversary of the death of Loreal Tsingine by Winslow Police Officer Austin Shipley in Winslow. The billboard will be up for six months on the south side of I-40 westbound and is located near the Flying J truck stop in Winslow. (Bordertown Justice Coalition)

WINSLOW, Ariz. — The Bordertown Justice Coalition unveiled a billboard in Winslow as a memorial of the second anniversary of the death of Loreal Tsingine, who was shot and killed by former Winslow police officer Austin Shipley March 26, 2016.

She was 27 years old at the time she was shot five times at close range by Shipley.

The Navajo-Hopi Observer reported April 2, 2016 that, according to police, the 100-pound, five-foot tall Navajo mother was uncooperative and brandished a pair of scissors when she was apprehended by two officers who said she matched the description of an alleged shoplifter at a local Circle-K. The scissors have since been discovered to be blunt medical scissors.

At the time, Ty Yazzie, a spokesperson for Tsingine’s family, said police left Tsingine’s body on the street until 6 a.m. the next morning while they cordoned off the scene to conduct the investigation.

Bordertown Justice Coalition is an ad hoc group that came together in 2016 in response to the killing of Tsingine.

The billboard will be up for six months and is on the south side of I-40 westbound, near the Flying J truck stop entering Winslow.

A vigil was held March 27, marking the second year anniversary of her death, by family and friends.

Floranda Dempsey, Tsingine’s aunt, said it is important to remember her.

“Never forget and keep saying her name, Loreal Juana Barnell Tsingine,” Dempsey said in a press release before the vigil. “She mattered. We, the family of Loreal are very, very thankful, more than words can say. A big heartfelt, ahe’hee’. Thank you to the Bordertown Justice Coalition for helping and supporting us.”

The Maricopa County Attorney’s Office cleared Shipley of wrongdoing in the shooting. The U.S. Department of Justice reviewed the case but said it could not prove beyond a reasonable doubt that Shipley willfully used excessive force and did not act in self-defense, the Associated Press reported in October 2017.

Dempsey said the billboard is a reminder that the family does not believe Tsingine has received justice yet.

“This will remind us that we will not forget until justice is served,” she said. “This visible pressure will hopefully get the much needed attention that will get the justice Loreal deserves. Not only for our baby girl but for all missing and murdered indigenous women throughout the world. We all matter.”

The coalition is comprised of a number of different Native groups and people who respond to everything from police violence to border town discrimination within and around the Navajo Nation and other reservations.

“Some of our members have worked on issues of discrimination in Gallup, in Albuquerque, especially through The Red Nation, which one of our member organizations,” said Bordertown Justice Coalition spokesman Andrew Curley. “It’s these different groups that come together on this project of addressing border town violence against Native people.”

The group also has organized responses, vigils, protests within Winslow for Tsingine.

But Bordertown Justice Coalition’s work does not stop with Tsingine. It continues to focus attention on Native people who usually escape attention.

“There isn’t anything as high profile in the news and the media are paying a lot of attention to it,” Curley said. “I know that the members work all the time with the subtle and mundane forms of injustices that we have to challenge.”

Those challenges include police round ups of Native people within Gallup or Flagstaff and other border towns, unsheltered Native people not having food and needing some clothing in cold months. The Red Nation does an active winter clothing drive for Native unsheltered people in order to prevent those people from dealing with exposure and other kinds of vulnerabilities that are caused by being unsheltered.

“There’s a lot of work that is always being done by the people who are part of the Bordertown Justice Coalition,” Curley said. “We don’t always have the high profile of Loreal Tsingine’s killing, but it’s definitely something that is impactful in that Native people, who are the most vulnerable, who are dealing with the violence of police and the violence of city government — these are the people we try to help out. We can’t solve their problems but we try to assist in what’s going on.”

Navajo Nation sues the city of Winslow and the federal government

On March 27, the Navajo Nation filed a complaint against the city of Winslow and the federal government alleging civil rights violations in connection with the shooting death of Tsingine.

The Navajo-Hopi Observer reported April 2, 2016, that many community members claimed police ignored crucial eyewitness accounts of the shooting that put the officer at fault. They said police did not administer any life-saving measures to Tsingine such as CPR and the police department officers prevented eyewitnesses at the scene from administering aid. In its claim, the Navajo Nation said that “Tsingine was left to die on the cold pavement without friends or family around to comfort her in her last moments.”

“This type of treatment of our people in border towns will no longer be tolerated,” said Navajo Nation President Russell Begaye. “Our people have the right to be free from unreasonable violence when the visit our neighboring communities — particularly from off-reservation law enforcement. Navajo lives matter, and that needs to be acknowledged and protected by our bordering jurisdictions.”

Navajo Nation Attorney General Ethel Branch, who attended elementary and middle school in Winslow while her parents lived nearby on the Navajo Reservation, said in a press release announcing the filing of the claim, that Native people fuel the economy of Winslow and people have as much right as anyone else to be free from police violence when they shop, work and attend school.

“Native Americans experience death bv police at a higher rate than any other group,” Branch said. “Although we make up only 25 percent of Winslow’s population, we averaged nearly 64 percent of Winslow Police Department arrests from 2012-2015. There is clearly a problem in how Winslow treats its Native population. We hope this lawsuit will inspire the city to pursue meaningful changes in their law enforcement policies and procedures to ensure that Native lives are valued and protected.”

According to the Associated Press, the city of Winslow declined to comment on the lawsuit, but police Chief Daniel Brown said an external performance review led to more training on the use of force and hate crimes, and the department revamped its policies.

A new 15-member police advisory commission has two seats for Navajo citizens and one for the Hopi Tribe, Brown said.

“We’re definitely moving in the right direction,” he said. “The police department needs to be more inclusive of the community.”

Curley said the Nation’s filing a formal complaint is part of Bordertown Justice Coalition’s campaign for justice for Tsingine.

“Loreal is an example of that,” he said. “It is one that is clearly documented and that is something that is troubling about it. To us, [the Nation filing a complaint] it’s a movement and a gesture toward justice, but there’s so much more that needs to be done including Winslow formally apologizing to the family, offering compensation for the loss of a family member and holding the police department to account for its lack of diligence in vetting its officers.”