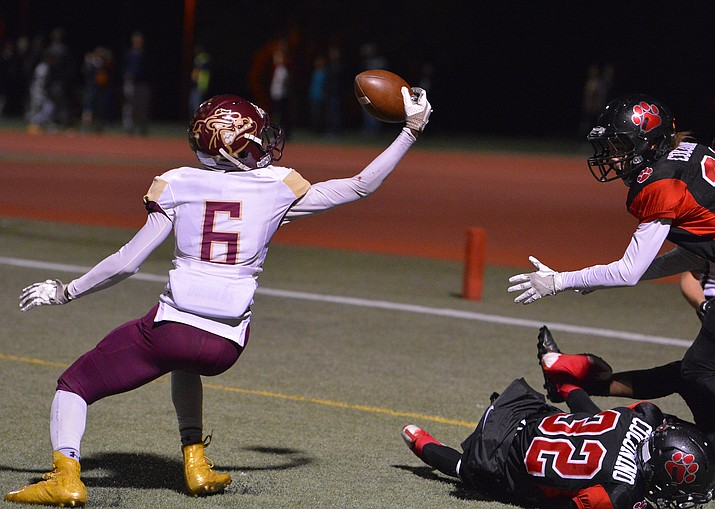 Yoann Djassa juggles a pass reception in the end zone. 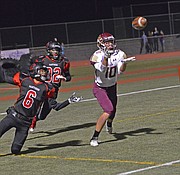 WINSLOW, Ariz. — The Winslow Bulldogs defeated the Coconino Panthers 24-14 in Flagstaff Sept.22. The Bulldogs remain undefeated at 5-0 while Coconino fell to 1-4.

The Panthers got off to a good start and scored on a 35-yard pass from Bryce Wright to Kyle Casados after recovering a fumble and then a muffed punt. The conversion by Casados gave Coconino a 7-0 lead.

Coconino threatened to score again at the end of the first quarter, but Yoaan Djassa intercepted a pass in the end zone as the quarter ended with Coconino leading 7-0. The Bulldogs did not move the ball in the first period but started the second with a drive. Coconino held and took over on downs around the Panther 30-yard line.

The Bulldogs got the ball back on a fumble and scored on a 14-yard pass from Brennan Sawyer to Jalen Lyons. The conversion pass was incomplete and the Panthers led by a single point, 7-6, with half of the second quarter played.

Coconino intercepted the ball midfield and threatened to score with less than a minute left in the half, but the Panthers were forced to punt with only seconds remaining. The half ended with Coconino leading 7-6.

Winslow’s Daniel Vizcaya recovered a fumble on the next play on the Coconino 22-yard line. The Bulldogs scored on a fourth down 22-yard pass from Sawyer to Djassa who made a circus catch. The conversion run failed and Winslow had its first lead at 12-7 with about three minutes left in the third quarter.

The Panthers were inside the Winslow 20-yard line when the third quarter ended with Winslow leading 12-7.

Justin Brown scored for Coconino on a five-yard run on the first play of the fourth quarter. Casados converted to increase Coconino’s lead to 14-12.

The Panthers intercepted a Winslow pass at their 15-yard line with about seven minutes left in the game and they drove into Winslow territory.

Sawyer recovered a Coconino fumble. Winslow made it to the Coconino five-yard line on a 56-yard pass from Sawyer to Mikel Bonner. Bonner then ran five yards for the touchdown that gave Winslow the lead. The conversion attempt failed and the Bulldogs led 18-14 with three and a half minutes left to play.

Djassa intercepted a Coconino pass and returned it 40 yards for the touchdown that gave Winslow a 24-14 lead with just three minutes left, after the conversion run failed.

Noah Upchurch intercepted a Coconino pass but fumbled in the Coconino end zone. The Panthers recovered the fumble with just two minutes left in the game.

The Bulldogs will face their most serious test of the season Sept. 29 when the Snowflake Lobos come to Emil Nasser Stadium. Snowflake is struggling some this season with a 3-2 record. The Lobos did not play Sept. 22. The Lobos defeated Tuba City, 49-6, and Chinle, 55-6, but lost to Kirkland Central, 21-14, and Thatcher, 27-6. The Lobos won their last game 13-10 over Safford.