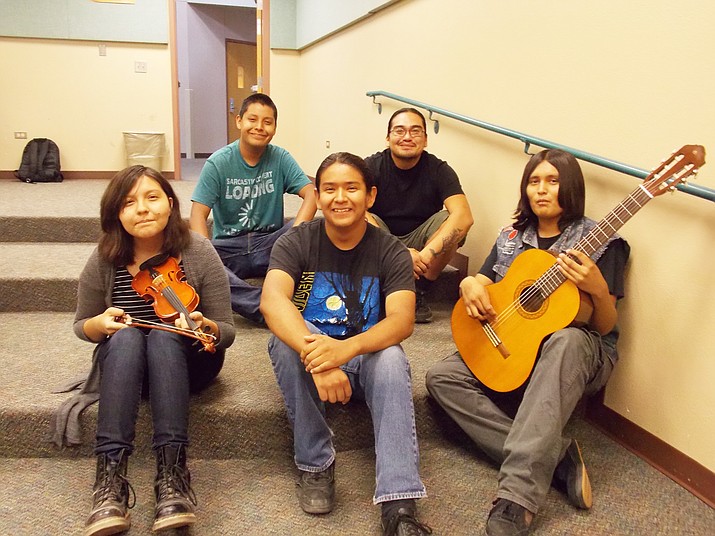 TUBA CITY, Ariz. — Founded in 2001 by the Grand Canyon Music Festival, the NACAP (Native American Composers Apprenticeship Program) has had overwhelming success as the only Native music composer program for high school aged American Indian students in the nation.

Since that time, two major art awards have been bestowed upon the NACAP program.

The Arizona Governor’s Arts Award for Arts in Education, and a major, national high visibility award from the National Arts and Humanities Youth Arts Award was presented to the NACAP and Grand Canyon Music Festival artistic Director Clare Hoffman by former first lady Michelle Obama in 2011.

This year marks the 16th year of NACAP at Tuba City High School, which features a local Native composer-master teacher for its program by showcasing new Native student musical works at the Shrine of the Ages auditorium in the Grand Canyon National Park the first weekend in September.

Michael Begay, a Navajo tribal member, works with students from Tuba City High School to present all of the new student musical work at a weekend concert series.

Begay has been the NACAP Tuba City High School master teacher for the special student composer program for the past five years and was once a student apprentice composer himself, under former mentor-master Native composers Mohican tribal member Brett Michael David and Navajo Nation tribal member Raven Chacon.

Now, Begay has moved up in nationwide musical ranks and is a recognized accomplished professional musician and producer in his own right. He will be releasing his own work on CD and online this coming winter.

The Tuba City High School students studied with Begay over the past summer and the beginning of fall 2017 semester creating their new composition work. Begay said it was a challenging year, from working out schedules with the varied NACAP participating schools and the students’ individual schedules — some have sports, chess and part time jobs.

“I had to split up the NACAP schedule for Tuba City High [School], so we had to do classes one week at a time,” Begay said. “But all of my Tuba City High students are extremely motivated and disciplined, so they worked on their individual compositions on their own time, too.”

Begay said three of his four students are returning students who have written compositions several years in a row. He encouraged students to use more advanced string techniques for their compositions such as ‘Pizzacato,’ in which musicians pluck the strings or ‘sol Ponticello,’ which produces an eerie, raspy, metallic sound that is achieved by bowing nearer the bridge of string instruments. Begay said that if students wanted to repeat a certain passage, he encouraged them to repeat it with style.

“It’s wonderful to work with these students, some of [whom] have never had any form of musical training at all,” Begay said. “But some have had some exposure through their parents or a family member to play an instrument. My NACAP students never cease to amaze me.”

Begay said students make his own personal commitment to music and the arts even stronger by knowing he is helping to shape the future of Native music composition.

“NACAP is deeply needed and appreciated, just as much as regular academics, to keep the doors open to aspiring new musicians and composers,” Begay said.

On Sept. 3, the music students traveled with Begay to the Grand Canyon’s Shrine of the Ages to hear their works performed publicly for the first time by the Catalyst String Quartet to a sold out audience.

The student work was rewarded with a standing ovation.

NACAP is managed by the Grand Canyon Music Festival organization and it administers monetary support given by numerous organizations for the musical art enrichment of Native students.