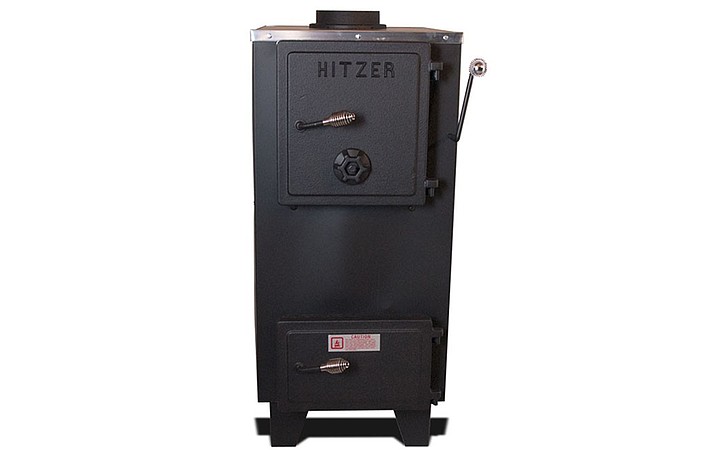 A coal burning Hitzer stove by Aspen Fireplace and Stone.

FLAGSTAFF, Ariz. — Chris Navarro, owner of Aspen Fireplace & Stone, is selling a coal burning stove that he recommends for its health benefits and its efficiency.

While the company sells many different models, Navarro said there are only two that work with the coal that are available in northern Arizona.

The base model is tall, ugly with no window, but it is made to heat, Navarro said. There is a nicer model, as well, with legs, glass and available with a fan.

“The Hitzer base model, the one I want to promote, with secondary combustion, retails just under $1,400,” Navarro said. “It’s more expensive than the ones you can buy off the internet, or what’s all over the reservation, but it’s better and will last longer.”

The stove is also more efficient.

“There is a really good health benefit, if they’re going to buy a stove, then, at least get something that burns cleaner,” Navarro said.

Navarro said the traditional stoves that are built and sold on the reservations are not built very well. They are not as efficient, or clean-burning, they dump all the particulates up into the air.

“They’re leaky because they are made from thick pieces that fit very loosely, so they can expand or contract, otherwise they would fall apart,” Navarro said.

The Hitzer stoves are built in Amish country in Pennsylvania. And even though that is a different type of coal, the stove comes in two versions that function on the coal that is available in northern Arizona.

“It’s a lighter gauge metal that’s designed to expand and contract at the rates that coal burns,” Navarro said. “You end up with a longer life on the stove, but the main thing is, all the smoke and the particulates that are normally wasted up into the air, they are burned for heat inside the stove.”

Navarro said the key is getting the fire going and there is a lever that swings down, which steers the smoke into a side chamber. That chamber has two bricks that look like a roof without a peak. When the bricks get hot and the smoke hits it, the smoke rolls up the bricks and reignites in what is called secondary combustion.

“What is normally lost up the pipe gets burned within the stove to create more heat,” Navarro said. “But more importantly, those particulates don’t get dispersed in the air. Whatever you burn inside of a stove, goes up the pipe, outside, and then falls back in and naturally, will get drawn back into the house.”

And the stoves do not only burn coal, they also burn wood, though not as efficiently as they burn coal.

“A true efficient wood stove can’t burn coal because coal destroys it,” Navarro said. “A modern stove uses secondary combustion… either with a catalytic filter, which is a brick with a lot of really tiny holes or stainless steel tubes where incoming air is channeled through those tubes. It’s so hot that when the smoke passes underneath it, it ignites it.”

But coal is different, Navarro explained. Coal releases its heat faster than wood. A modern day wood stove is designed to expand at a certain rate based on the wood fuel it is burning.

“You put coal in there and now that rate of expansion is much, much faster than [the stove] was designed to handle and it cracks,” Navarro said. “And when they crack and they leak, they lose their efficiency because you can no longer regulate their rate of combustion.”

Navarro said he stopped selling coal stoves years ago because he did not think the stoves he was selling were very good, he knew they would pollute and they were not healthy. And while people told him that people would have to buy the stoves from someone and why shouldn’t that be him, Navarro said he did not sell coal stoves for a long time. But when he found the Hitzer, he changed his mind.

“When I found these, I knew it was something good that could be offered to help,” Navarro said. “Yeah, it’s a business, I get to keep the lights on, but it is something that I really feel good about that could made a difference.”

Aside from the health benefits, Navarro said, it’s the fact that you’re getting something that is quality built, that is going to last a long time and be safe.

“Cast iron stoves that are common require many clearances,” Navarro said. “These are more of a modern product. The majority of stoves that you can buy online, the castings are made overseas in Asia, some are assembled here, some over there, but they are not always safe. [The Hitzer] is a better product.”