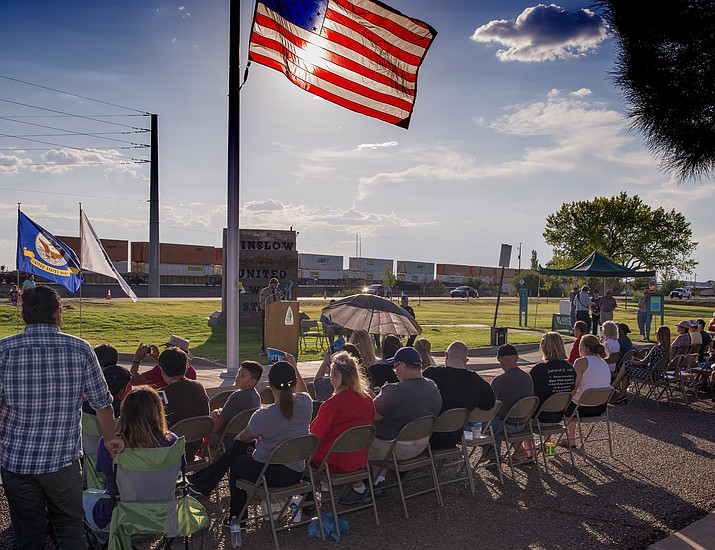 Community members gather in Winslow on 9/11 to remember and honor those who fell in New York City on Sept. 11, 2001. Photo/Todd Roth

WINSLOW, Ariz. — Winslow honored the fallen heroes of the terrorist attack on 9/11. The first time Winslow honoured those who fell on that day was in 2002.

The idea and execution for a Winslow 9/11 memorial came from a citizen’s group and was originally conceived as a garden — two tall thin trees evoke the image of the Twin Towers.

While in the design stage, the group realized they could obtain wreckage from the attack and modified the garden concept to incorporate those items. The group eventually obtained two beams from the wreckage and the trees from the garden were replaced by the two Twin Tower beams. The Winslow Wal-Mart distribution center in Buckeye, Arizona sent a semi and two drivers to collect the beams and bring them to Winslow. The site retained the same name.

The monument is a quarter mile west of the original site at 2101 East Third St., which provides more space and a formal setting for the memorial. The 9/11 memorial is now named the Winslow 9/11 Park and is incorporated into the city park system.