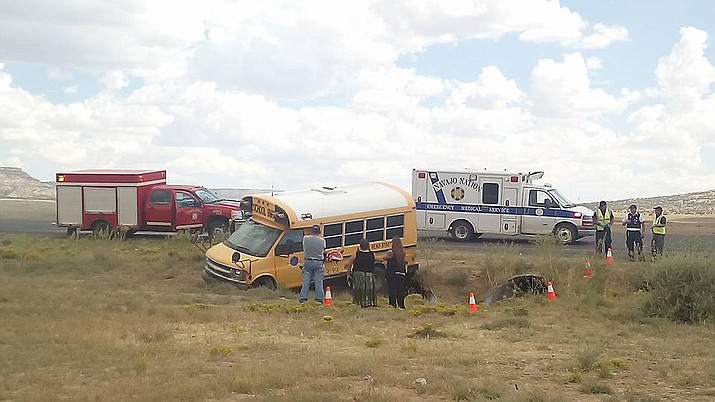 An intoxicated driver collided with a school bus approximately one mile from Whippoorwill Headstart School Sept. 11. All children on board were reportedly unharmed. Submitted photo

WHIPPOORWILL, Ariz. — On the afternoon of Sept. 11, Navajo Police Department arrested the driver of a vehicle that crashed into a school bus on the Navajo Nation, two other passengers were arrested for public intoxication.

Virgil Yellowhorse, 33, was arrested for driving under the influence of alcohol, seven counts of endangerment to the welfare of a minor and nine counts of aggravated battery. The passengers in the vehicle, Jarvis Yellowhorse and Myron Bowe, were arrested for public intoxication.

Reportedly, the intoxicated driver collided his vehicle into a Whippoorwill Headstart school bus approximately one mile south of the Whippoorwill Chapter House.

Navajo Nation Police Officer Nikela Simeona, who was dispatched to the scene, immediately checked on the school bus. The officer reported all seven children on the bus were okay.

Eyewitness accounts said the driver of the vehicle ran from the location and headed east of the scene. Another eyewitness told the officer that a person was lying down in the wash just west of the scene.

A medical unit transported the two passengers. The driver did not need medical attention.

Of the seven children on the bus, four were immediately picked up by their guardians and were not able to be transported to the hospital by the school. The school took the remaining three children to the hospital to be checked for medical injury.