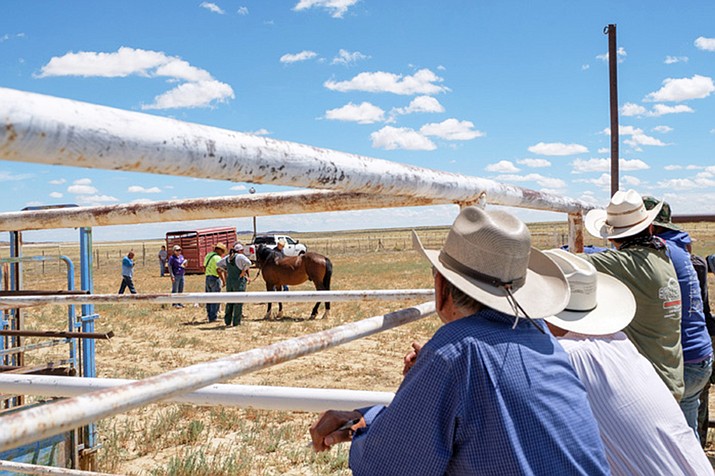 Twelve-year-old Leilani Benally, of Naschitti, New Mexico, stands in line to get birth control treatment for her rodeo horses during a free clinic July 26. Photo/Ray Landry

NAVAJO NATION — For centuries, wild horses have roamed the Navajo Nation, where they serve as both a symbol of the unconquerable Native spirit and the iconic image of the American West.

Considered a separate and heartier breed than their domesticated counterparts, wild horses have aesthetic and sentimental significance, said Simone Netherlands, president of Salt River Wild Horse Management Group, a non-profit advocacy organization based in Arizona. But they also have distinct historic, ecologic and scientific value.

“On a lot of American public lands, the wild horse population has been murdered,” said Netherlands, who also is a member of the American Wild Horse Campaign and is working with the Navajo Nation to help protect and preserve its wild horses. “That’s not true on tribal lands, where Native Americans see horses as the icon of their history, the story of their ancestors, and where they are an important part of the ecology and the science behind creating higher quality domestic horses.”

These free-roaming horses now are at the center of a heated controversy on the Navajo Nation over how — or whether — the tribe should take extreme measures to control a population that by some estimates tops 50,000. Wild horse advocates like Netherlands favor comprehensive and humane methods of birth control to gently curb the population, but the tribe also is considering more drastic solutions, including large-scale roundups and issuing permits for horse hunting.

“The bottom line is that we have too many horses,” said Gloria Tom, manager of the Navajo Nation Department of Fish and Wildlife. “We do aerial surveys every year, and every year we’re seeing more horses where they shouldn’t be. If we don’t do anything, that population of 48,000 or 50,000 could double in the next four years.”

The department in March proposed a horse hunt and asked sportsmen and Navajo citizens to weigh in. The controversial proposal immediately set off a firestorm among horse enthusiasts, owners and advocates, but it also triggered renewed support from organizations or individuals suggesting alternate solutions.

A hunt would be “very localized and very controlled,” Tom said, and it would be part of a “multi-tool strategy” to manage the horse population. Other methods would include sterilization, adoptions or the sale of wild horses to entities off the reservation.

“At one point, the Navajo relied pretty heavily on horses for transportation, for work around the farm, for herding, plowing, riding and ceremonial purposes,” Tom said. “At one time, many of these horses were owned by someone, but because of the cost of raising horses, they have just let them go wild. It’s not uncommon for people to own 50 horses simply because they didn’t have the means to manage their herds. When it gets out of control, they just let them go free.”

A rising wild horse population means deficits for other wild animals and livestock, Tom said. As wild horses continue to multiply, they compete for food and water with elk and other big game, not to mention the tens of thousands of domesticated horses that live on the 27,000-square-mile reservation.

“The problem is humongous,” Tom said. “Whatever management plan we decide on, a big component will have to be education and outreach. We have lots to do to reduce these numbers.”

This is not the first time the Navajo Nation has contended with an overpopulation of horses and other livestock. A Bureau of Indian Affairs-funded report published in February found that the tribe faced similar issues in the late 19th century when people were concerned about overgrazing and erosion, and again in the early- to mid-20th century when the federal government introduced forced livestock reduction programs.

In the 1880s, one man reportedly had 600 horses near Black Mountain, in northeastern Arizona, the report found. Another man had 1,300 horses in Monument Valley.

Forced herd reduction, which began in the 1930s, first targeted sheep and goats, but later included horses. The federal government established quotas for different types of livestock on specifics areas of the reservation. In the 1950s, the Navajo Nation took over, enforcing its own range management protocols.

In the final decades of the 20th century, Navajos could sell wild horses to off-reservation customers or slaughterhouses, said Leo Watchman, manager of the Navajo Nation Department of Agriculture. In late 2005, Congress defunded horse inspection stations and slaughterhouses, leading to a mass closure of such facilities.

“During the 1980s and 90s, there was a market,” Watchman said. “People could get $400 or $500 for a feral horse in a market where people bought and sold horses. This might be a strange way to look at it, but these markets are how we controlled the horse population.”

Since slaughterhouses closed more than a decade ago, the horse population on the Navajo Nation has grown exponentially, Watchman said. The loss of a market, coupled with the rising cost of hay, has led many horse owners to simply let their animals roam free.

In the last five or six years, the Navajo agriculture department has processed about 15,000 wild horses, Watchman said. It has seized unbranded horses and sold them off the reservation—often to adoption groups, but also to foreign slaughterhouses. Watchman had no data on how many horses are being slaughtered or where they end up.

“When horses are processed off Navajo, there’s a transfer of sale, a change of ownership,” he said. “New owners don’t disclose where they go. Our only caveat is that we don’t want the horses to be brought back to Navajo.”

But even the occasional roundup and sale of horses is not curbing the population fast enough, Watchman said. That’s why the agriculture department, along with Fish and Wildlife and a variety of horse advocacy groups are sitting down to talk about solutions.

“What we learned from rounding up horses is that it isn’t the best way—or most cost-effective way—to deal with the problem in some communities,” Watchman said. “At the end of the day, there have to be more initiatives out there.”

Watchman estimates the tribe must process 8,000 wild horses every year to maintain a “neutral” population. A report due out this fall is expected to explore a dozen different methods to manage the population. Watchman believes a plan that attacks the problem from every angle will have the most success.

“We’re talking about 10-12 different recommendations,” he said. “Roundups, adoption, sterilization, sending horses to therapy programs, willful sales, incentive sales, even a horse hunt. We need all of this in a successful management plan.”

Advocacy groups like Salt River want to a plan that prioritizes comprehensive birth control efforts. At a meeting in May, Netherlands took a stand against roundups and horse hunts. She urged Navajo officials to use the PZP vaccine which, administered through a dart, prevents mares from giving birth for a year.

“If you start now, you can stabilize the population in a few years,” she said. “We want to see horses shot with darts, not bullets.”

Leland Grass, a horse trainer in Shonto, Arizona, and cofounder of the advocacy group Diné for Wild Horses, believes the solutions are more organic. A horse hunt, he said, would be traumatic for horses and people alike.

“In the 1930s, the government came in and started making laws,” he said. “They started shooting horses, rounding them up and taking them elsewhere. We were told to reduce our livestock or it would be reduced for us. That’s what’s happening now.”

The solution, Grass said, is to return to traditional beliefs and natural range management practices.

“Is there an answer?” he said. “Yes, of course. Kneel down and pray. Tend to the horses, talk to them, pray with them and about them. Return to our teachings. Horses are the mirror image of our culture. The horses themselves are the solution.”