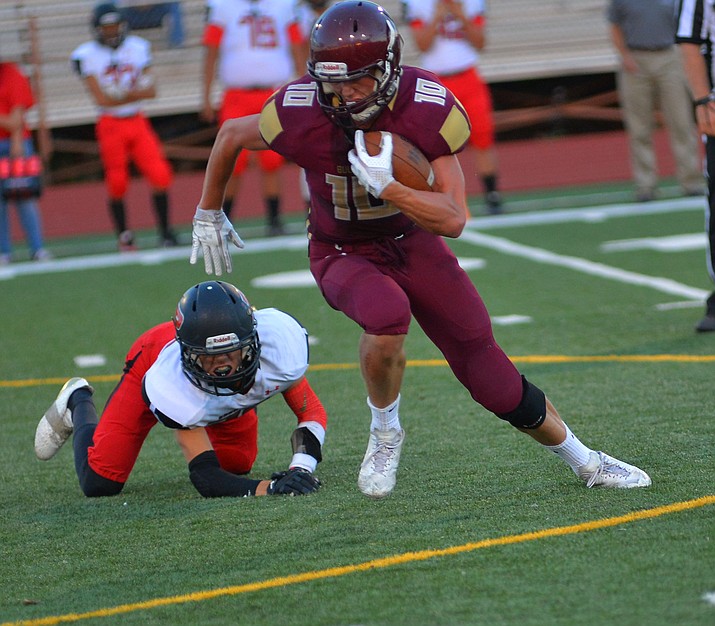 In a previous game against the Page Sand Devils, Jalen Lyons escapes to gain yardage for the Bulldogs . ToddRoth/NHO 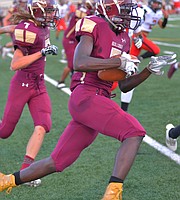 WINSLOW, Ariz. — The Winslow Bulldogs defeated the Tuba City Warriors 56-8 in Tuba City Sept. 15. The win improved Winslow’s record to 4-0 and left the Warriors with a 3-2 mark.

Tuba City’s other loss was to the powerful Snowflake Lobos 49-6 in their season opener.

Tuba City beat Pinon 67-6 and Hopi 39-0 in games from smaller divisions, but came away with a 12-7 win over Chino Valley last week. The Cougars won their first two games before losing to the Warriors.

In their win over the Warriors, Winslow had a good field position after holding Tuba City and getting the punt at the Warrior 41-yard line. The Bulldogs drove to the five-yard line where Junior Villanueva passed to Brennan Sawyer for the touchdown. The two-point conversion run failed and Winslow led 6-0.

Tuba City recovered a muffed punt at the Winslow 32 to give the Warriors their best penetration. The Bulldogs pushed them back and the ensuing punt went to the Winslow 24.

The Bulldogs drove down the field and Villanueva scored on a 37-yard run. The conversion pass failed and the Bulldogs led 12-0 with a little over half of the first quarter played.

The first quarter ended with Winslow leading 12-0 and driving again. The Bulldogs scored on a seven-yard pass from Villanueva to Yoaan Djassa. Villanueva hit Sawyer for the two-point conversion and a 20-0 Winslow lead with eight minutes left before the half.

The next time Winslow had the ball, the Bulldogs drove and scored on a three yard run by Mikel Bonner. A two-point conversion pass from Villanueva to Sawyer increased the lead to 28-0. With about four minutes left in the half. Tuba City scored a 61-yard pass from Bauer Zack to Barlow Marquez. Christian Yazzie ran for a two-point conversion cutting Winslow’s lead to 28-8.

The Bulldogs came right back to score on a 51-yard pass from Villanueva to Djassa and a two-point conversion pass to Noah Upchurch to increase the lead to 36-8.

Tuba City picked off a Winslow pass near their end zone on Winslow’s next possession. The Warriors moved to near midfield. The half ended with Winslow leading 36-8.

The second half began with another long Winslow drive. Sawyer scored on a five-yard run. The conversion pass failed and the Bulldogs led 42-8 with about seven minutes left in the third quarter.

The next time Winslow got the ball, the Bulldogs drove to inside the Tuba City 10-yard line and scored on a 12-yard pass from Villanueva to Jalen Lyons.

The conversion pass failed and Winslow led 50-8 with just over a minute left in the third quarter. The quarter ended with the lead and the fourth quarter was played with a running clock.

Winslow scored on the first play of the fourth quarter when Ahli Foster pick up a Tuba City fumble at the 12-yard line and running to into the end zone. The conversion pass failed and the lead was 56-8, Winslow.

The rest of the quarter went quickly with the running clock and the Bulldogs walked off with a 56-8 win.

The Bulldogs stay on the road Sept. 22 with a journey to Flagstaff to meet the Coconino Panthers.