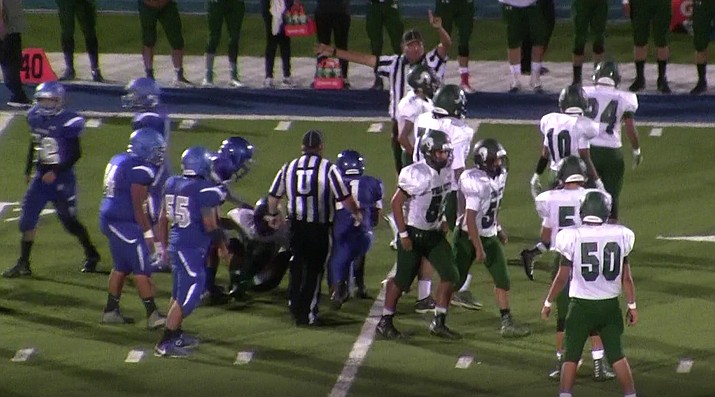 TUBA CITY, Ariz. — All throughout the country and especially in remote reservation areas, high school football teams are an extension of the communities in which they live.

Tuba City High School (TCHS), the Warriors, have been a football team since the 1950s.

With grandparents, parents and friends turning out to cheer them on, share stories, and help celebrate during homecoming week events, the Tuba City Warriors have had some phenomenal gridiron success.

This year TCHS has a new football coaching staff with Clemenston Lomayestewa as the new head coach.

Lomayestewa is a staff member of Tuba City Unified School District, and he is a Tuba City alum from 2001 — he also played football for the Warriors.

Lomayestewa said that he served as defensive coordinator for four years under former head coach Rick Benjamin. Benjamin moved back to Phoenix to be with his family and that was when Lomayestewa got moved to head coach.

With a 2-1 season already in play, Lomayestewa feels positive about the Warriors’ season.

“We have great group of kids coming out for our team this year,” he said. “We have a current total of 60 kids on both our varsity and junior varsity. We have a good group of both seniors and juniors who have stepped up to be leaders on our teams. Our most recent game last Friday night was at Hopi High, which we won at 39-0. We are a young team but building as the weeks go by. “

Lomayestewa feels confident about his Warrior players and spoke optimistically about the upcoming season.

“We work hard every day and our coaches are looking forward to a successful season,” he said. “We finished last year 5-5 and want to improve on that this year. Our goal is to get to state playoffs. This 2017 season will all depend on Warrior determination, team work ethic and, as always, discipline. But our coaching staff does have high expectations and we believe in our team.”