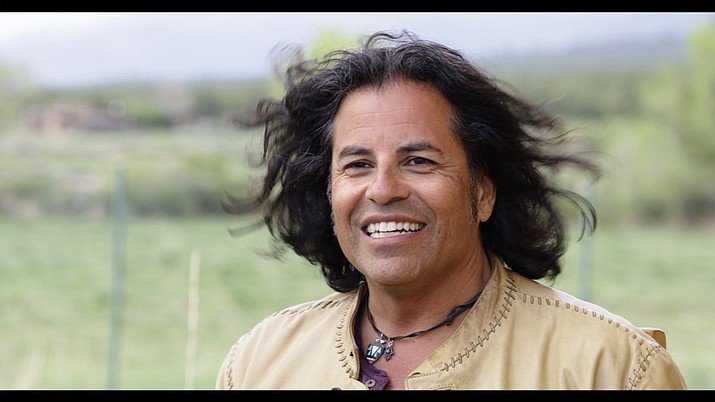 This documentary concerns the impact Native Americans had on rock and roll, blues, jazz and other forms of American music.

Salas, who played guitar with Rod Stewart, said the “Rumble” documentary has already been shown in Australia, Mexico and France. “Rumble” has also been shown in Atlanta, Philadelphia, Denver, Minneapolis, Seattle and Washington D.C.

“In Sidney, Australia, it was sold out two nights in a row in a big theater. I was asking people ‘Why are you here?” he asked.

Salas said most answered “Rumble” shows that people in the documentary are a byproduct of repressed people in America.

“Everybody loves Native American people, but they didn’t know their full impact on rock music,” he said.

Salas said he wanted a film that inspired people. He didn’t want a negative film that portrayed Native Americans as victims.

“Rumble” was written and co-directed by Catherine Bainbridge and Alfonso Maiorana. It was produced by Tim Johnson and Salas.

“Catherine Bainbridge and Alfonso Maiorana’s “Rumble” brings back the contributions of Native Americans and indigenous musicians to their rightful place in music history. The film is also a thrilling and beautifully constructed documentary, so it’s bound to appeal to audiences of all ages and backgrounds, nationwide.”

Salas said “Rumble” is important because it tells a history that has not been told. He said Mississippi Delta music is known as a black art form, but there is more to it than that.

Salas points to Jimmy Hendrix. Everyone knows he was African American, but he was also Cherokee and Scottish. Hendrix was proud of all his ethnicities.

“That’s the development of what this land was,” he said referring to the multiculturalism.

Salas said the Irish and Scottish were brought in as slaves.

“A lot were repressed and had that in common,” he said. “Music was also part of it.”

Salas, who is Apache, played with Rod Stewart when he was just out of high school.

Salas said he thought there were no other Native American musicians playing at a high level, but then he started to dig.

“I learned about Link Wray and Robbie Robertson. The stories kept growing,” he said.

Salas felt he was the luckiest man in the world to be playing with well-known musicians at a high level, so he wrote a book about it.

“It changed my life forever,” he said. “It’s always what made me successful.”

Salas went on to perform with Mick Jagger and Justin Timberlake.

These high level musicians recognized as a Native American musician Salas had a different rhythm.

“I was a little bit different than black or white,” he said. “I had a different approach to rhythm.”

Salas also performed and hung out with Steven Tyler.

“I was never the Native American guy. I was the musician. They respected me and we played together. They thought it was cool that I was Native American, but that’s not what got me in the door,” he said.

Salas said he is humbled because he still considers himself a fan of all these great musicians.

Salas said one important point of the film is that the top notch musicians who were interviewed about Native Americans were just that: musicians; they were not musicologists or journalists.

“We just wanted to let them say it,” he said.

Salas said he is glad that “Rumble” has won many awards because it has brought some attention to the documentary, but aside from that he’s not big on awards.

“It brought credence from the film community, so I was honored, but it won’t give me a bigger head,” he said.

Salas said he also doesn’t read reviews because if he believed the good reviews then he would also have to believe the bad reviews.

Salas said “Rumble” is a great way to show that there are Native American role models in the modern world.

“We were significant in all rock and roll and jazz. We were there for all of it,” he said. “This is American history. We went to the screenings and there were people there from all walks of life, all ages, all colors and creeds. They all said: “Why didn’t we know this?”

Part of the answer is that for many years Native American musicians did not want to admit their heritage either because they were not allowed to play or looked down upon.

Salas grew up in San Diego. His mother grew up in New Mexico with her Apache Tribe.

“My birth certificates says I’m white because nobody knew. We didn’t want to be Native American. It wasn’t sexy back then. My great grandparents were called savages and looked down on by other Native Americans because most were trying to assimilate,” he said.

Salas loves the quote by musician Robbie Robertson, who said his mother told him to be proud of who he is, but to be careful who he told.

Salas said many people and many musicians had no idea that Link Wray was Native American.

Salas said “Rumble” is important because it is inspiring, since it shows that many great musicians would not have been who they were without the influences of Native American musicians.

“You can be from anywhere and you can do it. You don’t need money. These guys did it,” he said.

In 1993, Salas released “Stevie Salas Electric Pow Wow,” a collection of songs that inspired him as a youth to feature guest performers.

In 2001, Mick Jagger hired him as a guitarist and music director for Jagger’s “Goddess in the Doorway” tour.

From 2006-2010, Salas served as music director and consultant for “American Idol.”

“Rumble” has been shown at various film festivals, including the Sedona Film Festival, along with openings in New York City, Los Angeles and Toronto. He hopes “Rumble” will be picked up by PBS and HBO.

Rumble was filmed in many locations in America and Canada.

Kino Lorber Inc., which released the documentary, has been releasing independent films for 30 years. Rezolution Pictures is the production company.