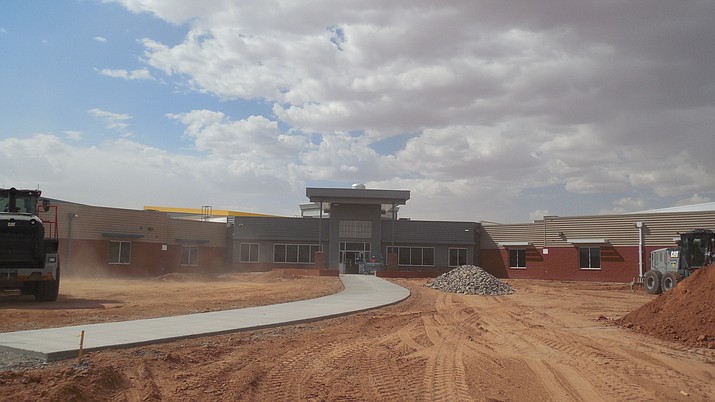 A new fully digital school in Tuba City is scheduled to be completed by December. Submitted photo

TUBA CITY, Ariz. — Tuba City’s new state of the art elementary school is on schedule to be completed in time for winter 2017 after 18 months of construction.

The new digital school, which is located uptown Tuba City on the corner of Main Street and Fir Street, will offer students the latest green technology building advances. These technologies will help assist students with their academic studies

Since most reservation schools were built in the last 50 years, they do not and cannot support modern technology that requires hard wiring and cloud computing capability demands. Modern facilities provide a completely self-contained and self-sufficient education facility.

That is one reason the new school is unique from other reservation schools at either the primary, elementary or even high school level on either Hopi or Navajo reservations.

This summer, the Tuba City Governing Board approved the last phase of the project, which includes tank and fire suppression and serves as the fire safety line for the entire building.

After months of review, the District Governing Board said the school will go with a larger public water system as the final phase moves toward completion.

The board originally had hoped to use their own artesian well located on the current school grounds for the new facility, however, after careful legal and funding source review they decided to use the public water system.

“We are happy to report that the building exterior surfaces and interior are at 90 percent complete,” Nez said.

Additionally, flooring, interior painting and trim on the doorways are nearing completion.

Community members of Tuba City and Moencopi villages are not allowed inside at this time to view the on-going construction interior finishing touches, however, the public can view the new school from the outside. The school can be seen from the safety fencing lining Main Street and Fir Streets in Tuba City.

Students and staff are slated to be in full occupation mode at the school by December.