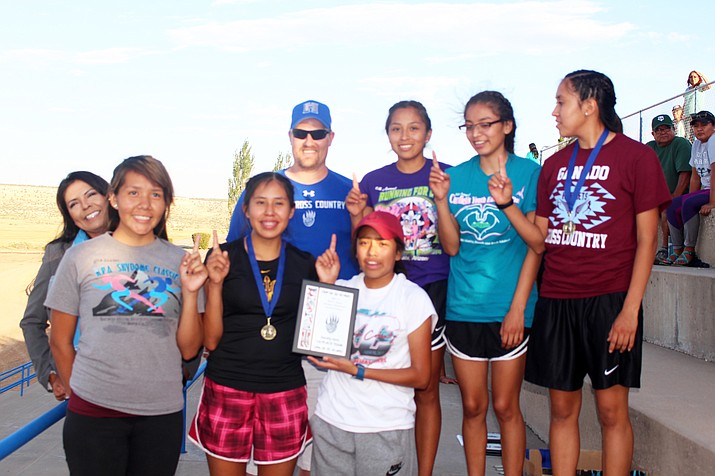 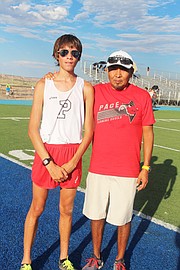 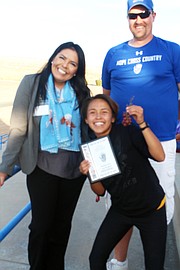 Chinle’s Alisa Honyumptewa was the individual champion in the girl’s race with a time of 21:14.6. Hopi’s Jaeda Honani earned second place followed by Flagstaff’s Katrina Vollmer in third.

Honyumptewa, a 16-year-old junior from Chinle, said winning the individual race was a good workout for the upcoming Peaks Invite. She said her coach told her to run hard the first mile, recover during the second mile and run hard the third mile.

“The heat was alright, but the sand got me,” she said. “When we finished I threw up because I ate pizza before the race. I shouldn’t have done that.”

Honyumptewa said her team ran their potential for this early in the season. She said she ran her potential except for the middle part of the race where she was recovering from the first mile of the race. She said she won the race despite running in old shoes which caused her ankle to be unstable.

Honyumptewa has been running since the sixth grade and last year ran into problems academically because she was focusing too much on athletics.

“It caused me to miss a meet. I don’t want to do that again because I want to get a cross country scholarship to college,” she said.

Honyumptewa plans to attend the University of Oregon to major in physical therapy and health occupations.

For now, she hopes to keep winning cross country races.

“Everyone on the team is counting me for state. With the help of God and the coach we’ll get there,” she said. “I give all praise to God. I’m a Christian.  I get all my support from my family, coaches and church.”

Martin, the 16-year-old junior champion from Page, said his victory showed how his summer training paid off. He placed fourth at the same race last year. When arriving at the meet, Martin thought the weather was bad because of the wind, but the wind calmed down during the race. He said the wind was just strong enough to keep him cool.

Martin said he ran to his potential for this early in the school year, but expects to improve as the season goes on.

“It felt good to win because this is the first time I came in first,” he said.

Martin said he pushed his pace at the beginning and in the middle of the race.

“It was smooth and strong,” he said.

“He coached me all of my high school career and he drove me to do my best,” he said.